Acorns, acorns everywhere! It’s that time of year when walking around the Arts Quad here at work, or walking to the parking lot can be hazardous to your health. The mass quantity of oak trees we have on campus are shedding their bounty, acorns. They fall randomly. They cover the sidewalks. They get kicked while you walk, crushed under tires, and many a squirrel is gathering and burying them for later.

A couple years back, upon seeing all these nuts, I pondered if they were edible. I mean, they are EVERYWHERE! If we can eat them like the squirrels do, why aren’t we taking advantage of them? It’s free food for goodness sake! As it turns out, they are edible. “Three Fat Guys In The Woods” made some porridge out of them. I found a recipe for Acorn-Maple Cookies made with Acorn Flour.

Last week, as acorns fell from trees barely missing my head and bounced off the sidewalk behind me, I decided that I would try my hand at the incredible, edible acorn. I gathered 30-40 nuts from a variety of different trees over the course of three days. I didn’t want to get too carried away with this, in case they proved to be nasty. While dinner cooked, I started cracking them open with a hammer because, well, who the heck knows where my real nutcracker is?

Other than a few nuts that went flying across the kitchen and my fiancé coming out wondering what the heck I was doing, then asking “Why?” when I told him, (answer: In the event of a Zombie Apocalypse and we’re desperate for food, of course) it was a pretty easy and quick process. Some of the nuts I’d chosen were too old. The meat inside was a shriveled, dry thing the size of a raisin. The majority however, proved in good shape.

I moved on to step two after dinner by placing the freshly shucked nut meats into a shallow dish of cold water to soak overnight. Acorns contain a pretty hearty amount of tannins which makes them super bitter to eat right from the shell. I tried a little pre-soak nibble and almost immediately spit it back out. The next morning I drained the brownish-yellow water and refilled the pan to let the nuts soak another eight hours. Another nibble was taken and again, spat out. So far, so bad.

Next, I placed them into a pan and began the boiling process. I let them simmer for about 15 minutes, drained, nibbled (without spitting it out this time) and boiled a second time for another 15 minutes.  I drained again and this time, let them sit in the strainer to dry. The final product after three days was a couple handfuls of, hopefully, edible acorn nuts!

Those are some hot nuts!

The final step, taking more than just a nibble. I removed a good-sized piece, popped it in my mouth, chewed cautiously and well, hm. Not so bad. The vast majority of the bitterness was now gone. There wasn’t a lot of flavor to them, a bit like a bland macadamia nut, but they were certainly edible. I think I’ll maybe try and roast them a bit next and add a touch of salt before presenting them to the family for a taste test.

Will I do this again? I don’t know. It was a lot of fun really and now that I know better what to look for when gathering the nuts so I get fewer dried up raisins stumps, I may move on to try and make some Acorn Flour and bake up some of those Acorn-Maple cookies I saw a recipe for next. 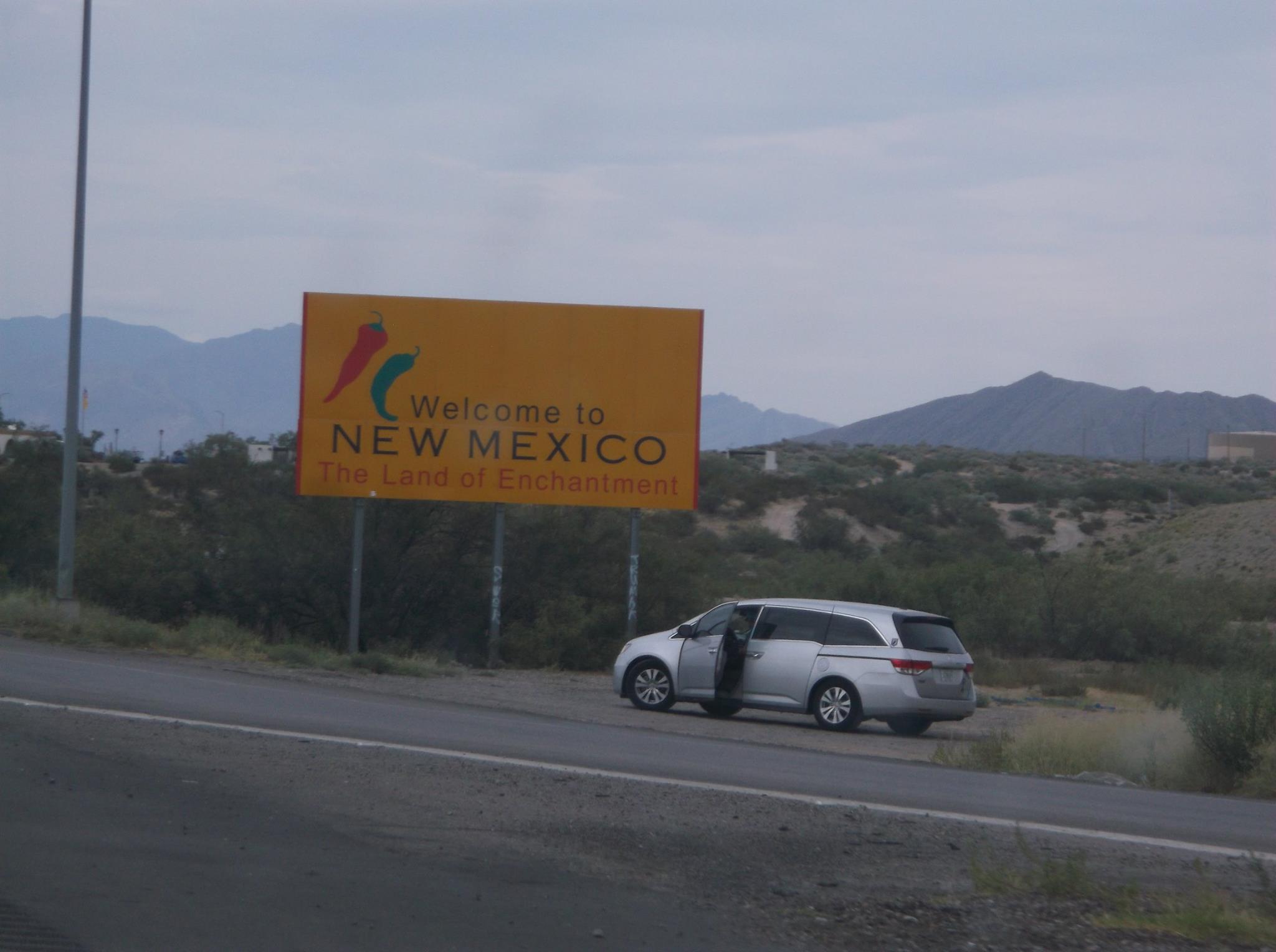 The past few weeks have been surreal.

At the age of five or six, I was a little kid with a big dream. I never doubted the dream. Never. It was at about that age I came to realize that there was something very unique about me amongst my kindergarten peers. Unlike them, I was born in the far off land of New Mexico. I don’t think I really understood where it was or how far away, but it made me feel different, special in a very proud and interesting way. When we were asked to write mini-autobiographies in grade school, my unconventional birth place was always mentioned. It became part of the foundation of who I was. The dream was born. It grew deep, deep roots not only in who I was, but who I would be and what I’d do and where I’d go. “Someday,” I can hear my six-year-old-self saying, “I’m going to go back to New Mexico!” My parents would always say they hoped I would. It was a good goal to have.

I poured over the family photo albums, memorizing the images of places I had no memories of. I’d listen with rapt attention whenever stories were told of this mysterious place far, far away. I was only six months old when we moved away from White Sands, yet in those six months something about the place must have been ingrained into my infant brain, this infantile sense of “this is home”. It sounds weird even to me. This Southwestern-ness sifted through my blood. My love of Mexican food arose from it. I don’t understand how that all can be, but it is and I’m not going to even attempt to explain it.

About five years ago I had reached a point in my life where I felt I’d come full circle. I’d been married and subsequently divorced. My kids were young adults. I was single. I was also feeling very lost. I had no personal goals and felt adrift on the ocean without a compass. I wasn’t sad, but I wasn’t really happy either. I existed, I didn’t live. My soul ached for a direction. Then The Dream winked at me and whispered, “It’s time.”

Fate is a funny thing. Within three months of this personal mission statement, I found myself in a new relationship. During our second conversation it was revealed we’d both lived at White Sands. The big difference was, he’d been there during his high school days. He had real memories. Fate smirked.

And so it came to pass that just over two weeks ago, four months before my 50th birthday, I found myself on a road trip with this fellow WSMR Kid, who was by now the love of my life, heading to New Mexico. The dream was more than just alive and well, it was thriving! Here I was closer and closer every minute. Mile after mile. Day after day. Until finally, after forty-five years of waiting, there it was, “Welcome To New Mexico”, signs pointing to “Las Cruces”, signs welcoming me to White Sands National Monument, signs that said, “You are now entering White Sands Missile Range”. Me, sniffling my nose and wiping away the tears of joy, of completion, of coming ‘home’. It still chokes me up.

For five days I probably took way too many pictures of sand and buildings and mountains and cactus. I probably spent way more time than your average tourist ingraining every element my senses could possible absorb in the short time we had there into my brain. I took actual handwritten notes and have dubbed it research for a future novel. I’d waited almost my entire life for this and I didn’t know, still don’t know, if or when I’ll ever go back again. I hope I do!

On top of all that, I’m with a man I love tremendously who is suddenly showing a very healthy interest in jewelry cases and rings. As if his enthusiasm over picking out a Native American Wedding Vase wasn’t enough, now this. THIS! There’s a longer story to the choosing of a ring than I’ll get into here, but suffice to say, after a mini-meltdown on my part, one was finally selected. It would be another week before I’d be able to wear it. Again, another story for another time. In the meantime, here’s a picture of The Bling.

Now we’ve been back in New York for five days. The dream has been lived and expanded upon. A beautiful blue topaz engagement ring has been placed on this middle-aged woman’s finger and I’m feeling that strange sense of the surreal. It crept up on me while I was telling my 22 year old daughter the story of the buying of the ring and subsequent kitchen proposal. Along with this weird near-disbelief that this is indeed my life and who I am and looking forward to who I am still becoming even at this age, I feel that questioning, eager tug of “What next?” Where will our next adventure take us? It reminds me of setting aside the first book in a series and not being able to start the second book for a few days. It’s there on your coffee table. It’s waiting. It’s ready to go.

Eventually, you are able to sit down with a cup of coffee on the front porch on a cool fall morning with that book. That’s where I am now, settling into Part Two, eager to know and live more of the story.