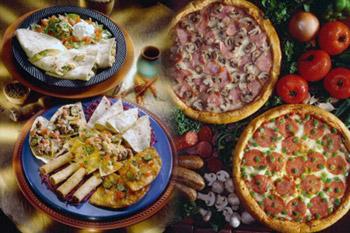 It’s well known that when you go to your favorite Chinese Buffet you’re not getting authentic Chinese food and Outback doesn’t serve up food indigenous to Australia. Teppanyaki, where the supposedly Japanese guy in the tall hat tosses knives and fire around as if they are as harmless as a three-year-old juggling Nerf balls, originated in Japan 1945 and arrived in America in 1964. The cuisine never really took off so much in Japan, but the tourists loved it! Not really what I’d call authentic. And, for the love of salsa, please don’t try and tell me Taco Bell is real Mexican food.

A few nights back I made some manicotti. When I say made, I mean I took the pre-made ricotta stuffed pasta out of the freezer, put it in a pan, added some home-doctored sauce from a jar, sprinkled it with cheese and popped it in the oven. Apart from meatballs, my Italian food cooking skills are pretty lame. It was tasty enough and enjoyable, but I’m sure many an Italian chef would have been horrified.

Last night, I decided Mexican was in order. According to Jim, I make a mean pico de gallo. I’m particularly proud of that, being as he’s a Texan and all and I figure he knows Tex-Mex better than anyone else I know. Yeah, even the Mexican food in Texas is more Tex than Mex, but I digress.

Feeling somewhat lazy and lacking the time, ingredients or willingness to get too into dinner making, I remembered I’d bought some frozen bean and cheese burritos. Normally, I don’t get this kind of crap because God only knows what’s in there beyond innocent beans and cheese. I fall short of making my own tortillas, (It may still happen! After all, it’s got to be easier than prepping acorns to be edible) but normally I’d put a bit more effort into it than last night.

So, I turn the oven on, decide that due to not having anything better to top the burritos with I’ll open a can of chili, (without beans, of course, because chili in Texas doesn’t have beans, does it, Jim?). Now I have a starch (ala the tortilla), and three proteins (beans, beef and cheese). Well, one must have a vegetable to make it a meal so to try and correct this oversight, I chopped up some onions and peppers and gave them a little sauté before adding the chili to the pan. Good enough. A nice, thick hearty chili.

In about 30 minutes everything is ready. I put the burritos in one of my pasta bowls and pour a good helping of the chili over them and top it with cheese. For a moment I considered popping that under the broiler to melt and brown the cheese, but was just too hungry to bother. Twenty minutes, a glass of milk, and two chili-smothered burritos later, I’m stuffed.

As I’m putting things away after the meal, I realize there are no leftovers. Whatever am I going to take for lunch the next day?! I poke around in the fridge and find, ah-ha! leftover manicotti! I set to work putting some into a plastic container for the next day.

An insane notion enters my mind. What if I were to cover the manicotti with Texas chili and bake it or how about taking the burritos and covering them with Italian spaghetti sauce? What have I stumbled on? Visions of alternate history flashed through my head. What if instead of the Spanish having such a huge influence on the Native cuisine back in the 1600’s, it had been Italians!? Could it be called a Mexican-Italian dish? Would Taco Bell be, I don’t know, Piadina Bell with little packets of tomato sauces on the side?

I’ll never look at manicotti or burritos the same again.

Next thing you know people will be putting tomato sauce on low mein noodles!