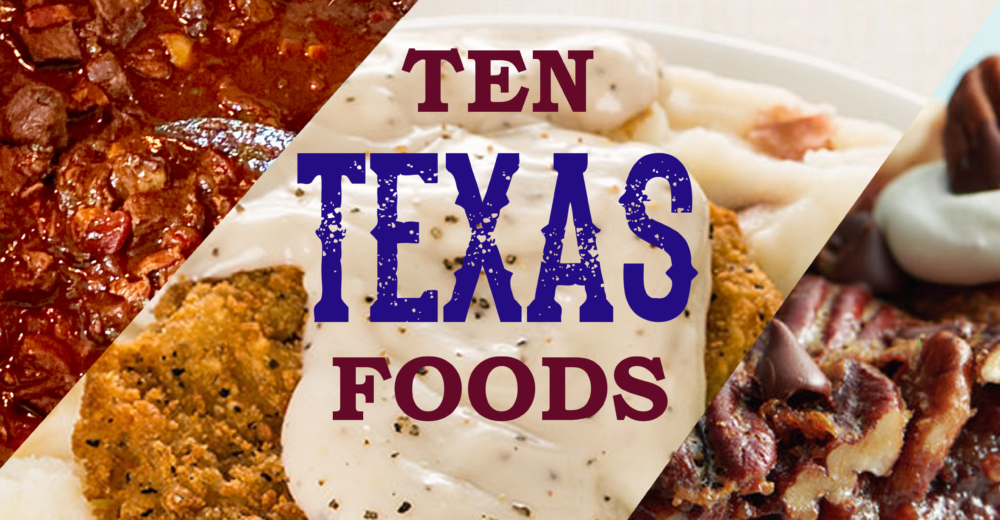 We haven’t been to my husband’s home state of Texas since 2018, which if far too long to have been away. People fly off moving motorcycles, pandemics strike, and other bits of life just gets in the way of travel sometimes. Happily, we’ll be heading out to the Great American Southwest in less than a week and we’ll be able to enjoy some of the things Texas is famous for once again.

Texas is known for a lot of things, like The Alamo and Big Bend National Park; the Dallas Cowboys, Houston Space Center, Luckenbach, and Austin City Limits; or maybe you’re more The Texas Chainsaw Massacre, From Dusk To Dawn, and The Town That Dreaded Sundown type like I am. But when you think of food, Texas probably isn’t the first place your mind goes beyond a bowl of chili or some mighty fine Tex-Mex.

Well, my friends, it’s time we fixed that. After a bit of research into the matter, I’ve come up with Ten Texas Foods, that are big on flavor and most of which you’ve probably heard of, if not eaten, without even knowing it was born in the Lone Star State. So, have a seat at the table, tuck your napkin under your chin, and grab a plate (cutlery optional), and let’s see what Texas has to offer.

Chili Con Carne : Called a ‘stew’ but bearing the ingredients and general description of what is now known as chili con carne, this dish entered the Texas food lexicon as early as 1828 and is believed to have been first created in San Antonio. The first modern-day chili cook-off was held in October of 1952 at the State Fair of Texas in Dallas. Until just recently it was pretty much given as gospel that the first chili cook-off was held at Terlingua, Texas in 1967. Having been to Terlingua while this event is going on, believe you me, the event is crazy popular, first chili cook-off location or not – and don’t forget to stay for the Dia de los Muertos celebration while your there, too.

Sausage Kolaches (that are actually Klobasneks): Kolaches arrived in Texas along with the tens of thousands of Czech immigrants (who came mostly from the Moravia district) and entered the state through the Port of Galveston in the 1850s through early 1900s. Over time, the traditional flat, fruit topped pastry better known by most as a danish, transformed into what Texans still call a kolache though in fact, it’s actually a sausage klobasneks that resemble pigs-in-a-blanket. I make these regularly for my husband’s lunch using Pilsbury buttermilk biscuit dough as opposed to the traditional bread-style dough, but I’ve not gotten any complaints. 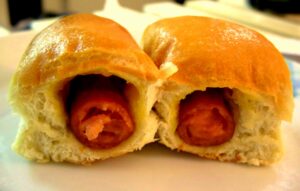 Chicken Fried Steak : Many sources attribute this dish’s development to German and Austrian immigrants to Texas in the late 19th century or as late as 1911. Lamesa, TX claims to be the birthplace of chicken fried steak and hosts an annual celebration accordingly.

Frito Pie : This dish has two possible origins. The earlier story claims it was created by Daisy Dollin of San Antonio in the 1930s. Sante Fe, NM claims the creation was first made there in the 1960s. Either way, Fritos were invented in Texas by Doolin’s son, Charles, and the dish was made popular at Texas high school stadium concession stands. I have to admit, the first time my husband mentioned this dish to me, I was very confused. As a Yankee, a pie to me is, well, in a pie dish with a crust, filled with fruit, and baked in an oven. This ain’t that but it sure is tasty! 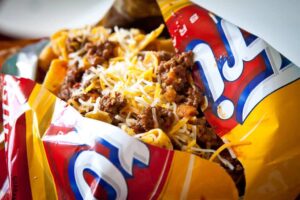 King Ranch Casserole: Origins are unclear, but the dish is named after the King Ranch in Kingsville, TX – reported to be the largest ranch in the world.  The most likely recipe for this Texas staple is a housewife from nearby Robstown, TX who entered the dish in a Campbell’s Recipe Cook-off popular during the 1950s. I have a hand-written recipe given to me by my mother-in-law that I’ve yet to make myself, but it’s darn good and I’m hoping she’ll make it for dinner while we’re visiting in the next couple of weeks. 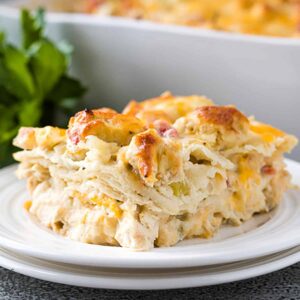 Fajitas : Originated by Spanish ranch hands working in south and west Texas. In 1969 in Boerne, TX a man wished to enter a food festival and sell tacos. However, the rules stated no two stalls could sell the same food item, so he came up with the term ‘fajita’ to describe his dish made with skirt steak. By the early 1970s the dish was very popular in San Antonio, Houston, and Austin.

Pecan Pie : Declared the official dessert of Texas in 2013, pecan pie is by no means exclusive to Texas, however, the official state tree is the Pecan as well as the state’s official nut. Traditionally, Karo brand corn syrup is the sweetener used for this recipe. The earliest known written recipe dates back to 1886.

Dr. Pepper : This cola was born and raised in Waco, Texas in 1885. Charles Alderton, a pharmacist, invented the carbonated soft drink at Morrison’s Old Corner Drug Store at the soda fountain. In 1891 the Artesian Mfg. & Bottle Company became the Dr Pepper Company and in 1904 the beverage was introduced to 20 million people at the World’s Fair Expo in St. Louis. As a life-long fan of Dr. Pepper – it’s the only cola I like – I had to see the original Dr. Pepper plant during my first trip to Texas in 2013. I even enjoy it served hot as was suggested during our tour.

Corn Dogs : You can thank those German immigrants of the 1920s for this tasty Texas treat. It first appeared at the 1938 Texas State Fair where the German vendors rolled sausages in cornbread batter and deep fried it. To make it easy to eat, they put it all on a stick and called it a “Corny Dog”.

Ruby Red Grapefruit : Originally discovered in South Texas as a mutation of a white grapefruit imported from Barbados where it had accidentally been cross bred oranges with shaddock or pomelo’s from Asia. Dr. Richard Hensz of Texas A&M would then isolate the sweeter, redder strain which is what we know today as the Ruby Red. The first grapefruit patent ever was granted to the Ruby Red in 1929.

So, there you have it, Ten Classic Foods Born In Texas and some of my favorites to boot! I hope you’ve enjoyed this little culinary trip around the Lone Star State. Main dishes, snacks, desserts, and beverages! The next time you enjoy that sizzling skillet of fajitas or a yummy corn dog, and wash it all down with a icy cold Dr. Pepper – you can thank Texas!