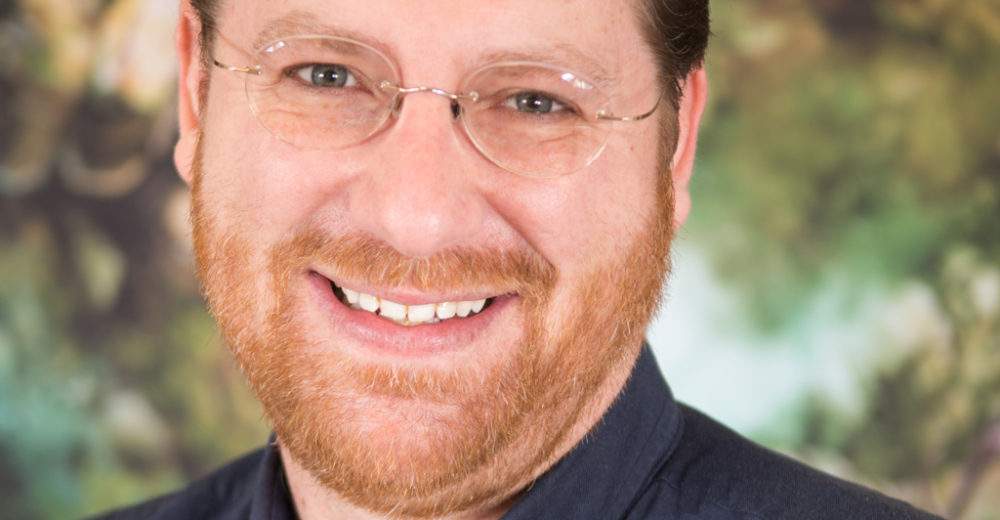 Twitter’s been a great venue for me to find fellow writers and share our unique senses of humor. One of the funniest I’ve come across is Fantasy author, Brian Rathbone. His quick one-liners always crack me up and made me very curious about the man lurking behind all those dragon jokes. And so, without further delay, here’s what I was able to find out.

Hi, everybody! I’m Brian and I’m weird but it’s okay. I promise.

Some writers come to writing later in life, almost accidentally, while others have been honing their skills from a very young age. How did your journey as a writer begin? What were some of your favorite books as a child and can you tell me a bit more about your children’s book, “The Silliest Dragon”?

As a kid, I hated reading. It was a forced act lumped in my mind with homework and making my bed—things to avoid at all cost! Then I read a Wrinkle in Time. It was unlike anything else I had read, and I was able to get lost in it. My tastes soon shifted to fantasy and series like Dragonlance, The Belgariad, Incarnations of Immortality, and other requisite fantasy reading of the 1980’s and 1990’s. I knew from that point that I would someday write my own stories, it was something I told my wife of 25 years on our first date, but it took some time and a couple false starts before the magic could happen.

May, 2005, in the Atlanta Airport, I inherently knew my time with my current employer would soon end. I flipped open my laptop and started writing a story I’d been thinking about for 15 years. It took another five years to have any success, and more than a decade to produce the twelve books that currently make up the World of Godsland fantasy series. 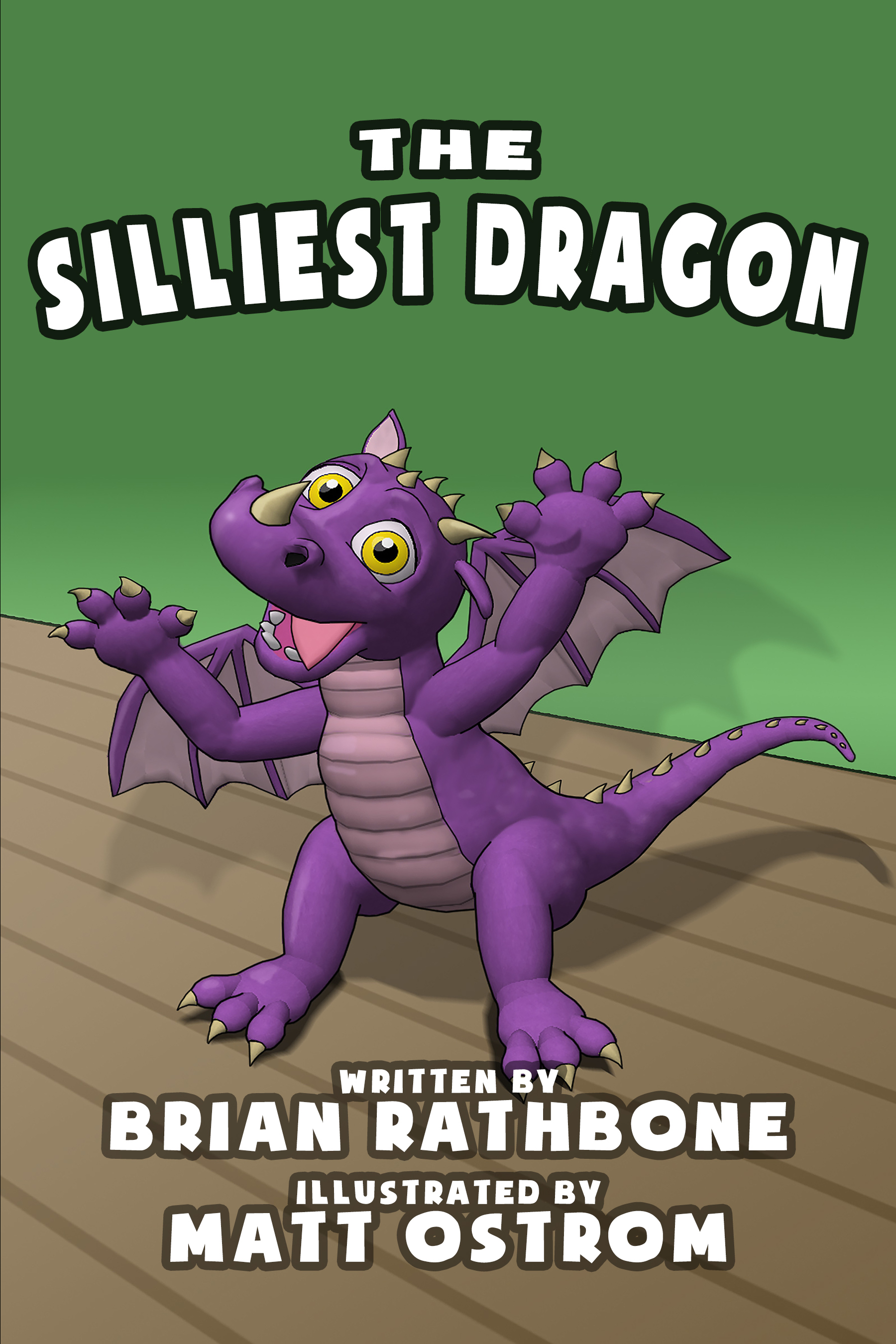 The little purple guy has become very popular in the India as well as the US, and now he has two more books coming out.

Speaking of dragons – you Tweet about them a lot! Clearly they are your favorite mythical beast. But, what about unicorns? I hear you spend a great deal of time thinking about them, too. Where do they stand in the Brian Rathbone Universe?

Unicorns are a dangerous subject. Very pointy… In all honesty, I find dragons easier to write in a credible way, although my horse training experience would seem more relevant there than with dragons, but that’s not how it has worked out. I may find a way to work the magical creatures into my fiction at some point, but mixing them with dragons just seems like a vet bill waiting to happen.

My tweets, while inspired by my fiction, have a flavor and personality all their own. When throwing things at the wall to see what sticks, unicorn jokes almost always stick. This is why so many of them end up as short-order cooks in little “hole-in-the-wall” places. It’s just physics.

Setting a mood for a story is one of the most important parts of writing, but what about setting the mood for yourself as you sit down to write? Do you have a special time and place, or maybe some music you like to put on to get your creative juices flowing for a good session?

My process is to walk and work on the scene in my mind until it plays smoothly, taking hand-written notes along the way. I will often listen to classic and progressive rock to set the mood. The Wind Blew Them All Away by Transatlantic is a particular favorite. When scene plays like a movie in my mind, I sit down and try to get the scene to go from my brain, through my fingers, and into keyboard. That never works. I muddle through anyway leaving a trail of typos and errant tildes just for flavor. I then go back through my hand-written notes and make sure I didn’t miss any gems. Repeat this process four to five times per writing day, and I can complete a rough draft in three weeks. I then bask in the glory of being a writer for a week or two before knocking myself back down a few pegs during the editing process.

Despite all the memes that keep screaming at authors to be writing during every waking moment, all occupations require some downtime. When you’re not writing, what activities allow you to relax and regroup?

I’m weird. Have I mentioned that? I haven’t written fiction in three years. When I write, I tend to binge write. I fight and scrape to find dedicated blocks of time where I can concentrate and write more cohesive novels. In some ways, writing fiction is how I regroup from the other things I do, and vice versa. Professionally, I am a technology generalist, programmer, inventor, tinkerer, and computer networking jack-of-all-trades. I’ve written software that manages the manufacturing of sofas, fruit salads, and car mirrors. Sometimes I get them mixed up. If your sofa tastes funny, don’t blame me, it’s closer than it appears.

I also write technical non-fiction, mostly for state and federal agencies regarding the mapping and expansion of broadband internet access in underserved areas. Telling dragon jokes on Twitter is like a vacation from it all, and I don’t get to spend nearly as much time interacting these days as I would like.

When I’m not doing those things, I really enjoy online auto racing—the more realistic the better. I’ve been known to take a car with dragons painted on it to victory lane. You should see the burnouts! 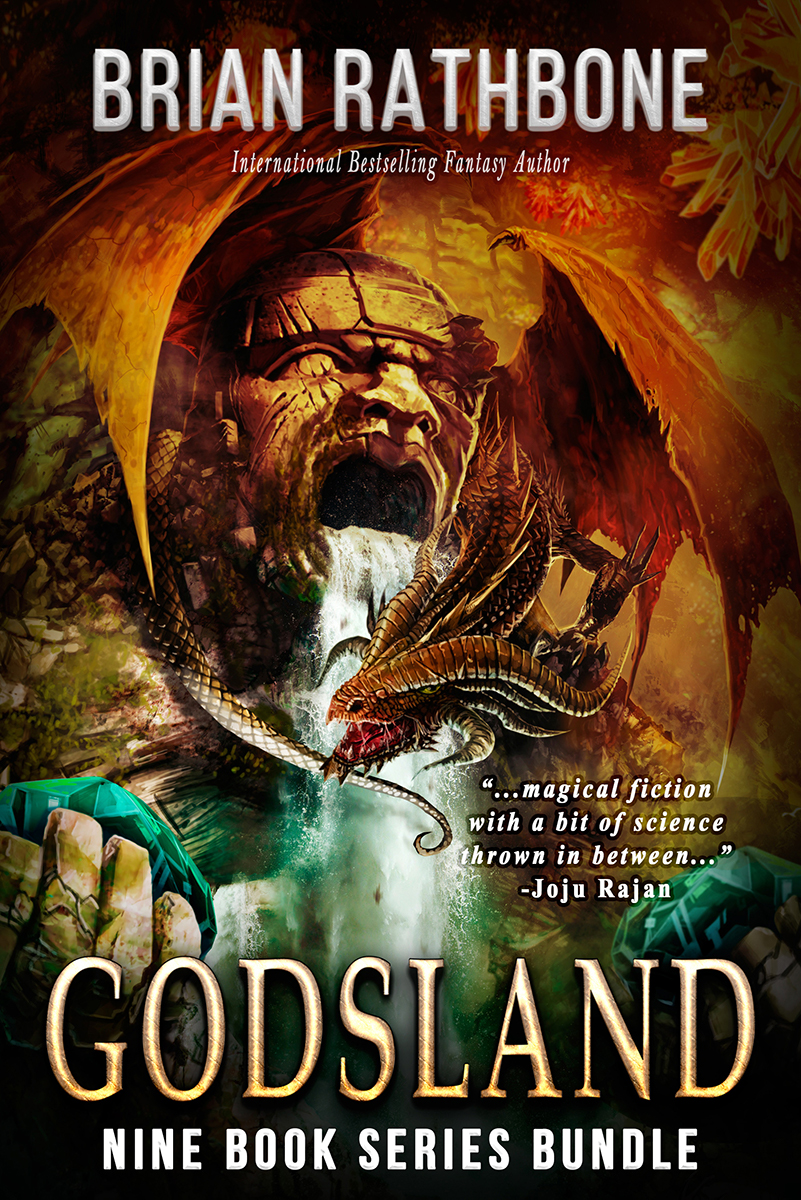 I know there must be several works in progress going on. Can you tell me what’s up next for you and about any recent releases? Where can people learn more about your work?

I’m so excited to begin the fourth trilogy in the main Godsland story line. This trilogy will complete the primary story line. I also have a sequel to Dragon Airways to write, and I have an idea I’ve been honing for a couple years now for a stand-alone fantasy novel that is more suitable for traditional publication. While I haven’t written any fiction for years, I have continued to hone the characters and stories in my mind. It’s always fun when I get to brain dump a nearly completed novel.

Thanks so much for taking time out of your busy schedule to share a bit of yourself with my readers and me.

Thanks to you and your readers for playing along.

Brian is stalkable on Twitter as Fantasy Author @BrianRathbone. You can find Brian’s work on his website www.brianrathbone.com or visit his Google Play Store.