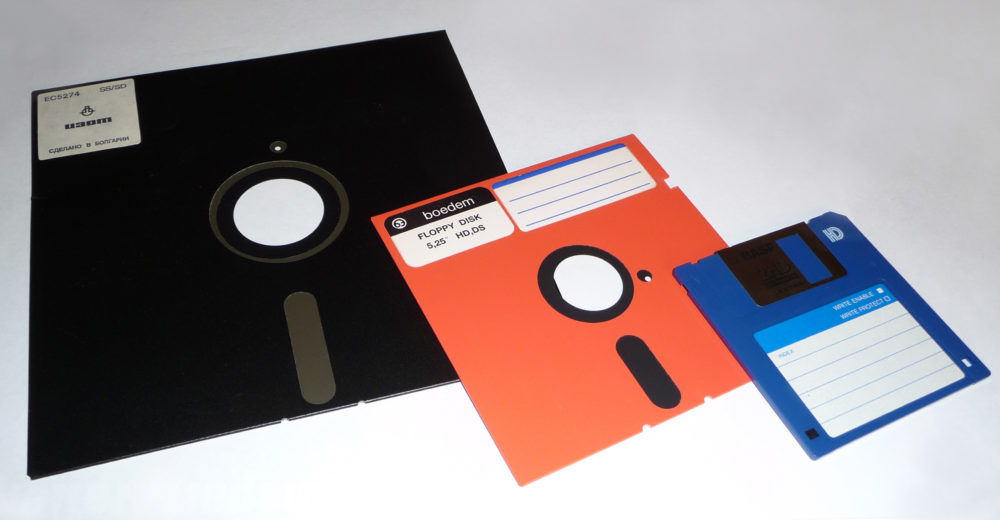 Before the creation of thumb drives and ‘clouds’, we had 5.25” and 3.5” floppy discs. The 5.25” were actually quite thin and, well, floppy. Hence the name, I suppose. The 3.5” had a much more rigid outer casing which made them much less likely to become damaged. I mainly used the 3.5” for storing and saving my writing works. I could save a lot of data on one of those bad boys. I still have a few kicking around my writing space.

Back in the day, I used to carry a large plastic folder that held the printed version of whatever I was working on at the time. I’d write, do a quick proofread, then print it out and add it to the folder as I progressed. I’d also save it on the carefully labeled floppy disc. There were times I’d fall behind on having an up-to-date printed version as I didn’t have my own printer at home. I’d bring the disc in to work and have it printed in the library’s printing center for about 2 cents a page. The 3.5” floppy traveled safely in a pocket on the inside of the plastic folder. This was my back-up plan and it worked great.

Until one fateful night …

As I got on the bus that night to head home from work and settled into my seat, panic and dread suddenly washed over me. My folder was not in my book bag. SHIT! I looked out the bus window just in time to see my beloved work in progress, printed version and the saved floppy disc version, dwindling away, left behind in the bus shelter on the bench. There was no stopping the bus.

Back then I took a regular commuter bus that only made two trips per day. Once in the morning to drop riders off at work and once in the evening to pick us all back up and take us home. (Oh, the joys of rural American living where public transit is almost non-existent.)  Needless to say, I was nearly in hysterics! My book! My precious book!! There was nothing I could do but pray to every infinite power of the universe to somehow keep all that hard work safe until I could return the next day. Sleep wasn’t easy that night.

In the morning, the plastic folder and all it contained was gone from the bus stop bench. Someone had found it. Buy who? And what did they do with it? How would I ever find them if they had it? My name wasn’t anywhere on the folder or the floppy disc. I could only think of one thing to do – send out a message via the library’s list-serve and hope … hope against all hope, that someone out there had seen it and taken it somewhere safe.

This all made me give serious thought to my methods of backing up my work. The idea of writing almost an entire book all over again from scratch was mind-numbing. I could never get it all back. Since then, I’ve added more layers to saving my work. I still print as I go and I still save it on a jump drive, in fact I double save it – meaning there are two copies of the work on the same jump drive in case one of the versions becomes corrupted. (Yup – I’ve almost lost a ton of work for that reason, too).  I also email the most current version of the file to myself at least once a week. I keep another final draft in a file on my home computer. The printed version and the jump drive are almost never kept in the same place and of course, and both are marked with my name and contact information just in case.  The emailed version is stored somewhere within that mysterious mega-file cabinet in the sky.

This new method has worked very well over the years. I’ve never experienced that same level of utter panic and horror as I did that night on the commuter bus. Back-up, back-up, back-up! By the time all is said and done, I have five copies of the piece to go to should things go awry.

As to the fate of that plastic folder and 3.5” floppy disc left at the bus stop – both were recovered. They were found by a student who happened to work in one of the nearby libraries who took it to the main desk. Another person who worked at that desk was the daughter of a woman who worked in the same library I do. My cry for help to the campus-wide library list-serve was heard. I had my precious novel back in my arms on my way home the very next day.