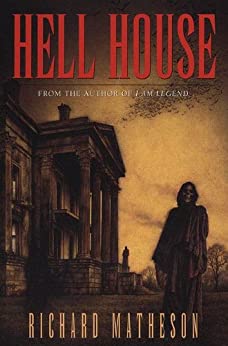 Ah… Hell House. The book and the movie (released as The Legend of Hell House in 1973) have been favorites of mine since I was a teenager. I was attracted to the movie first as it stars my favorite actors of all time, Roddy McDowall. The film simply blew me away and I have remained in awe of it ever since.

The premise, like so many other haunted house stories, follows a group of researchers who are out to prove or disprove the survival of spirit after death. Known as the “Mt. Everest of haunted houses”, Hell House has killed before. At least one of the newly arriving members believes it can, and will, kill again. He is physical medium. Benjamin Fischer. He was the sole survivor of a previous attempt to exorcise the house 30 years before. Florence Tanner is a Spiritualist and psychic medium who in convinced she will be able to find and release the tormented and trapped spirits of the place regardless of how demented, evil, and sexually perverted they are. Dr. Lionel Barrett, assisted by his wife, Edith, is the scientist and skeptic. He’s created a machine that he believes will remove the energy and spirits of the house once and for all. Not so fast there, Dr. Barrett.

Shortly after seeing the movie, I read the book and was amazed because of how closely the film follows the book. It’s not exact, but the dialogue is almost word for word from book to movie. I haven’t read it in almost 40 years. I don’t tend to re-read books. I’m SO happy I gave Hell House another read.

For some, the pacing will be a bit too slow and maybe the imaginary somewhat weak with not enough blood and violence, though there’s a fair amount of sexual shenanigans going on between the ghostly sheets. For me, the balance is perfect. I’m more into suspense and mysteries. Give me a puzzle to solve. Guide me along as if I’m one of the visitors to Hell House. Show me the evidence and see if I can figure out what, if any, answer there is.

Highly recommend reading the book first…. and now I really need to go and watch the movie again … for like the 100th time!