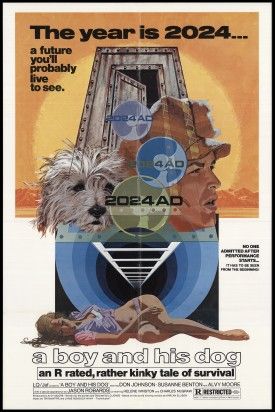 This little blast from the past was brought to my attention by my husband. He’d seen it before and thought I’d enjoy it so we sat down with a huge bowl of popcorn and off we went into the post-Apocalyptic world and the journey of well, a boy and his dog.

It’s 2024 and mankind has managed to remain alive, though far from civilized, following World War IV. Women seem to be at a premium because young Vic (Don Johnson) is horny as hell, but luckily for him his mind-reading, psychic talking dog, Blood, can sniff out a female from miles around. The two bicker constantly (mentally, of course) and no one but Vic can hear Blood advising, warning, and generally annoying Vic. All Vic wants to do is get laid. All Blood wants is to be fed. Despite their squabbles, they are a team and survive for and because of each other.

Eventually, Blood sniffs out a fine, ripe female for Vic at what passes for a town in 2024 and Vic is just about to make his move when danger befalls them all. A group of raiders descends on the place along with what are called Screamers. We never see these so-called Screamers, we just know they apparently glow green, scream, and kill everything in their path. After surviving the attack, Vic and Blood are ready to move on while the girl (Quilla) wants to return home to a place known as the Down Under. (No, it’s not Australia – but apparently a vast world located deep underground.) In order to escape from Vic (who wants to keep her around for sex) Quilla bashes him on the head, but Vic will not be so easily put off. He insists on perusing her and it is at the entry to the Down Under that he and Blood part ways. Blood keeps warning him that it’s a bad, bad, bad idea to go down there and agrees to wait for Vic to return, at least for a little while.

The boy really should have listened to his dog.

This movie is so 1975! It has a very Mad Max meets Fallout feel to it. There aren’t any special effects to speak of, just a weird bit of post-Apocalyptic shoot ‘em up fun about one young man’s struggles to get laid in a world gone to hell and a heaping helping a justice served in the end. This was a fun film that I really enjoyed. Not mind-blowing but certainly worth a watch if you’re looking for something a bit off the beaten path.

Or “Good riddance!”, as so many of my friends have shrieked at the top of their lungs, or typed IN ALL CAPS on social media, whichever the case may be. Okay, yeah, I get it, sort of. Your favorite celebrity died, your preferred politician didn’t win, or your team lost their Big Game!  It’s HORRIBLE! It’s the end of the world as we know it! Gloom, despair, and agony on me.

I could go off on everything that was bad about 2016 easily enough. I could sob over still not finding a ‘traditional’ publisher for my novels. I could bemoan the fact that online sales suck and that I’ve typed my fingers to bloody stumps asking for folks to at least post reviews. I could go off on a tangent about how unfair it is that people who have held a very good paying job for 5+ years can’t afford to buy a house while other people who haven’t worked a lick in that same period of time get all these special treatments when it comes to housing. There’s a rant out there about a-hole bosses who take advantage of their employees to the point that they are driven to physical illness and end up having to quit a job they otherwise loved. I could cry over the deaths of a myriad of celebrities that I liked. I could cuss and stomp my feet over the unfairness of our elections. I could begrudge how the Carolina Panthers lost the Super Bowl and that the Cleveland Indians didn’t win the World Series. But, I’m not going to do that, because I’m an optimist and I’m pretty sick and tired of hearing the “Apocalypse Is Nigh” from every other person on Facebook. I refuse to be one of ‘those people’.

Instead, I’m going to look at 2016 as the year I made more progress on my writing career, with or without the advantages a publishing house could give me. I’d love to have help with advertising and promotions and setting up signings, readings, and sales. I could be a lot further ahead of the game if I had all that, sure, but I don’t. I did the best I could with what I DO have. I did a Book Club talk and I had three signing events where turnout was good and sales were more than I’d actually imagined they’d be. That’s more than I’ve ever had before and I’m truly grateful. I made some new friends and got some great advice and some much appreciated help from far more successful writers than I.

I got remarried! That’s pretty darned awesome. I met a man against a whole lot of odds who was willing to pretty much give up his whole life 1400+ miles away and move up to this Arctic Backwoods Wasteland so we could be together. After living together for almost three years, we tied the knot on a beautiful day in August down by my parent’s pond with an amazing view of the valley below. It was small, only forty people, simple, and very casual and laid back. I’m not even going to mention those few things that didn’t happened perfectly as planned because they don’t matter. The end result is the same.

Life has been very good to me and mine in 2016. Most of the time things went how we hoped. Sometimes, not so much, but at the end of it all, we are happy. We have a place to live, food to eat, and warm clothes for winter. We have family and friends that love us, support us, and encourage us with our dreams. We have love. We have happiness. We have hope.

Thank you to everyone who helped make 2016 so amazing! May you all have a wonderful and prosperous new year! 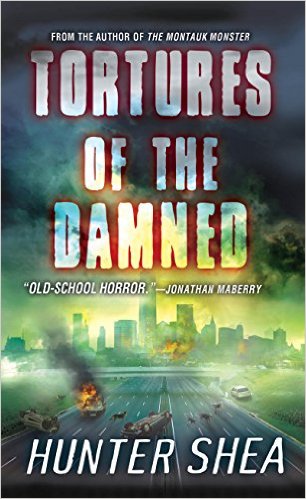 Review – “Tortures of the Damned” by Hunter Shea

What was once an easy walk or drive across town has turned into a nightmare for the Padilla family and their forward thinking neighbors, Buck and Elizabeth Clarke. Yonkers has a problem, a big, big problem. New York City as a whole is in trouble. The entire state, it seems, may have fallen under the same fate. So, too, America. Maybe the whole world! Thanks to Buck they have all survived, but after two weeks in his underground bunker, they are all getting antsy. With tempers starting to run high and supplies running low, they want out. All communications and electrical devices are down. They have no way of knowing what’s out there, but it’s better to die free than locked up in what is looking to become one very large mausoleum.

Welcome to the Apocalypse as envisioned by author Hunter Shea. It isn’t pretty, but it’s a real page turner. I started reading this 400+ page novel on Monday. I finished the following Saturday afternoon. I haven’t read a book that fast in years.

From the moment we emerge from the protection of the bomb shelter until the very end, Shea bombards us with one danger, one decomposed body, one feral, crazed animal and the occasional psycho human at a time or en masse, after another. It quickly becomes clear there is no law. The police and military are blatantly missing. It’s every man, woman and child for themselves. Kill or be killed is the new order of the day.

After reading Shea’s “Island of the Forbidden”, I knew I’d found an amazing story teller. And for as much as I enjoyed my time ghost hunting on Ormsby Island, the time I spent in Yonkers avoiding being killed while reading “Tortures of the Damned” was even more intense and satisfying. He has definitely improved on his craft from one book to the next. He offers just enough description to give you a feel for what’s going on while also allowing your own imagination to fill in the more gory details. That isn’t to say Shea doesn’t provide a healthy dose of the graphic. He does.

At the end I was left with some lingering questions. I’m hoping this all means there will be a follow up to “Tortures of the Damned”, because I really, really want to know more. If, however, there is no more, then I am woefully disappointed on a few key points.

I look forward to reading other Hunter Shea novels. Check out this title and all his other works HERE!