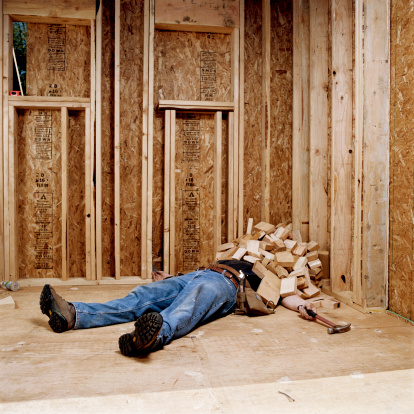 T-minus 3 weeks until wedding day. As I’ve been doing about every other weekend for the past few months, I loaded the car up yesterday afternoon with some items for said wedding day, in this case soft and adult beverages, and headed up to Morris Mountain where the nuptials and merriment will be taking places. It seemed a harmless enough mission, but boy, am I sore this morning.

As I pulled into view of the house, I saw my 73-year-old father over at the pavilion working on something. I decided I’d go say hello and see what he was up to before heading inside with the drinks and to visit with mom.

Though he complains a lot about having so much to do, I don’t think Dad’s really happy unless he has a project going on. This weekend he decided to tackle constructing and hanging some folding wooden shades for the pavilion. Keep in mind that when Dad builds a thing he BUILDS! a thing. It’s not going to fall apart. That thing is going to be there for a very long time. He built the house they live in over the course of about five years while also working full-time. It’s not a little house. It’s three stories (four if you count the full basement) with a huge cathedral ceiling and wrap-around front decks on two levels. So, no small task. He also built the pavilion in which he was working yesterday and the old and new outhouses nearby. I clearly remember him building the old one because I helped draw out and cut the crescent shape on the door. It’s what they used while constructing the house and it’s still there all these many moons later.

As a kid I helped dad out with his projects as often as I could. I really enjoyed learning how to use a T-square, a plumb-bob, a line level, a hammer, skill saw, and any other tools needed for construction. I pounded a whole lot of nails into subflooring when he added on to our house around 1975. I learned about building a cinderblock wall and how to lay a brick sidewalk. One weekend I helped him put up the new stovepipe for the coal stove while standing on the metal roof of the house. I was 16.

Last year, he installed a deck floor on the pavilion to replace the old crushed stone one and started work on the new outhouse. This year, he finished the outhouse which puts the bathroom in my house nearly to shame! He’s also working on building a trellis for the wedding and, now, these folding blinds.

So, I head over to see how it’s going. He’s having a hard time of it. The wood is heavy and awkward and he can’t balance things or line things up like he wants alone so I ask ever so casually, “Need some help?” I am immediately put to work holding up this, moving that, lifting this into place, lining up this other thing, and climbing up and down on the picnic table numerous times so I could reach and balance pieces in place. The project was not cooperating and really is a three man job, not one 73-year-old-man and one fifty-year-old female desk jockey wearing cotton capris and sandals work.

While dad went to look for another piece of rope in the cellar to help with hoisting and holding things into place, I popped upstairs to visit with Mom ever so briefly. But, my respite was brief and  doing as promised, I went back out to help once I saw Dad back at it, new length of rope in hand. Mom decided she’d come out and help, too.

Finally, three hours after I pulled innocently into the driveway, we got the first shade satisfactorily into place and called it a night. No, it was not the afternoon I had envisioned at all.

Despite having a very sore right shoulder from standing on a picnic table balancing two wood panels in place so Dad could get the hinges screwed in and my legs and arms aching a bit more than usual, I actually enjoyed the work.

It’s been a long time since I’ve gotten to help my dad build anything. He can still work circle around me and I think it’s time to pass the torch to the next generation. Therefore, this coming week, my 25-year-old son and a friend of his are going to go help Grampa Morris finish up this particular project.