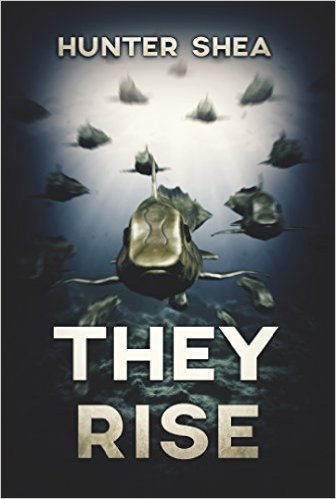 Because apparently sharks, jellyfish, sting rays, electric eels, fire corral, lion fish, sea snakes, stone fish, octopus, and squid are just not enough to keep some people out of the water, author Hunter Shea has come up with yet another nasty creature of the briny deep. His creation, the Chimaera fish (aka Ghost Shark), isn’t entirely fictional but let’s hope to Poseidon these things never actually become a hundred percent real.

Hunter specializes in monsters and cryptids. In “Swamp Monster Massacre” he takes on the legendary Big Foot\Skunk Ape.  In “The Montauk Monster” we get to meet his version of well, the Montauk Monster, a pseudo-cryptid that first washed up on the shores of Montauk, NY back in 2008.  Ghosts become deadly in Island of the Forbidden and zombies of all shapes and sizes populate the streets of Yonkers, and maybe even the world, in Tortures of the Damned.

For “They Rise” Hunter Shea takes us deep sea fishing off the coast of Florida. It seemed like a good idea at the time, but things go bad fast when the fish at the end of the line ends up eating, instead of begin eaten by, the fishermen. What appears to be an isolated incident soon turns into an aquatic nightmare as it’s discovered these apparently extinct prehistoric fish have grown to gargantuan proportions with appetites to match. And there’s not just a few, but thousands of them! Human flesh rates high on their menu to the point of ramming and capsizing boats and jumping on decks to get to whoever is foolish enough to stand out there.

For a book of only 150 pages, “They Rise” packs in a lot of information, intrigue, blood and guts gore action, and suspense.  Hunter Shea does not disappoint in the plot department at all and I enjoyed almost everything about this book. My only disappointment was central core character development. I didn’t feel like I got to know them as well as I would have liked and that left my sense of caring about what happened to them somewhat lacking. From reading several of his lengthier books, I know Hunter can do this quite well. “They Rise” would have benefited from a similar treatment.

Despite that, an overall enjoyable and fast-paced read. I’d maybe not suggest it for anyone who plans on doing any deep sea diving or ocean fishing in those warm, southern seas this summer. I know I won’t be and despite this creature being primarily fictional, I’m still going to add the Chimaera fish to my fast-growing list of reasons not to swim in those sorts of places just to be safe.

Be sure to check out all of Hunter’s twisted world at: https://huntershea.com/