It’s hard to believe it’s the middle of May already. Spring has been desperately trying to spring here in the Northeast. Here’s hoping our recent bought of warm and sunny weather is going to stick this time! April proved to bring us a plethora of rain. May has certainly blessed us with flowers. One of my four lilac bushes is literally drooping to the ground under the weight of its own flowers. The small murder of crows I’ve been trying to lure in with peanuts and cat kibble are slowly making a comeback by perching in the trees outback and cawing at me. Our back yard is mostly set up and ready to go for a summer’s worth of friends, family, evening fires, fair weather, and food. In between all of that, along with writing and submitting a couple novels and a bit of dark poetry to some publishers – one of which has already been accepted – I’ve managed to get in some reading time.

In last month’s Book Bag, I’d just started Ann Radcliffe: The Great Enchantress by Robert Miles. I’m happy to report, I’ve emerged victorious from this adventure into some serious literary analysis, yes, Sigmund Freud even showed up! It reminded me way too much of all those English classes where the instructor insists that the color of the chairs is symbolic of the four Cardinal directions as specified in some mystic’s dream book from the early 15th century. Maybe it was, maybe it wasn’t. I don’t use a lot of symbolism when I write and the one time I tried to be clever that way, I got so bogged down in trying to remember what represented what that I completely lost track of where I wanted to go with the plot. I tend to believe the chair was blue, red, yellow, or green because the writer liked that particular color and thought it would be nice, but maybe that’s just me. That aside, I learned the difference between ‘horror’ and ‘terror’ as it was defined back in the late 1700s and that Romances weren’t considered Novels. An interesting and educational read despite the academic dryness.

While slogging my way through that, I managed to get in some good old short stories from Israel Finn’s collection, Dreaming At The Top Of My Lungs. I’ve been eyeballing this book for a good long while and finally decided it was time to give it a read. As with any collection or anthology, you’re going to find some you really enjoy, some that leave you confused, or some that just don’t hit the spot. Happily, most of Finn’s stories were very enjoyable and better still, memorable! My biggest complaint on this one is that it was way, way too short! I’m hoping to add more of Israel’s work to the TBR pile in the future.

I recently dove back into the dark and murky depths of another Hunter Shea cryptid book. This time it’s poor old Nessie that he’s picking on. Hot on Shea’s aquatic tail (see what I did there?) is a Lyle Blackburn book that takes us beyond the realm of Boggy Creek to look at other cryptids of the ‘Squatchier kind found deep in the American South, but we’ll save any further details on those for next month. 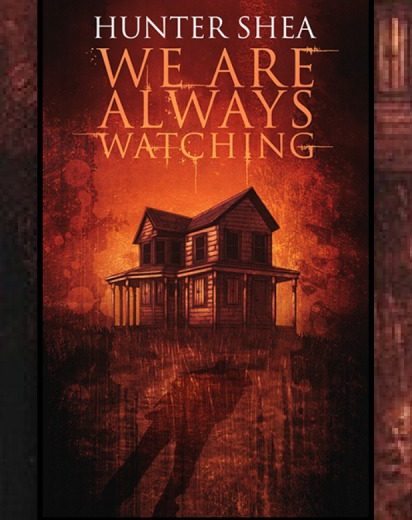 Welcome to the fifth installment of my monthly Author Interviews! Over the past year, the works of Hunter Shea have pretty much dominated my reading list. It all began by answering a simple call to be part of a Blog Tour in which I’d receive a book, read it, and review it within a given time frame. I was sent Island of the Forbidden, a lovely romp on an isolated island with murderous ghosts! About two days ago, I started one of his cryptid tales, Loch Ness Revenge.  I’m never disappointed when it comes to a Hunter Shea novel. We’ve chatted and emailed on and off, me usually seeking advice, and he graciously giving it. So you can imagine my delight when he quickly accepted my request for an interview!

And so, without further delay … Here’s Hunter!

1. Every writer has a story on how it all began for them. When did you first begin to realize you had a knack for story telling? Was there someone that influenced\encouraged you down the path to being a writer? 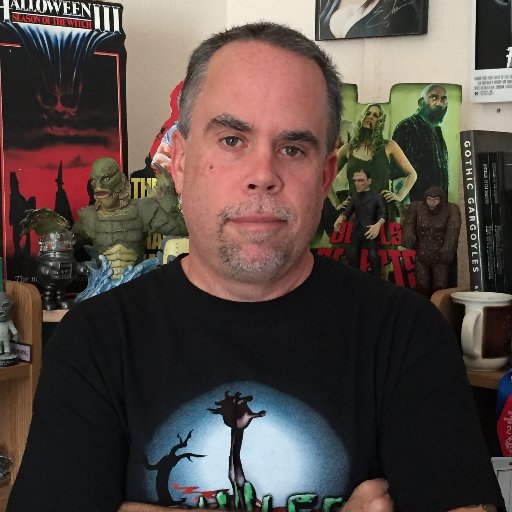 I’ve always been a huge reader and fan of horror. At one time, I dreamt of being a horror director, back when Jason was terrorizing the silver screen. I wrote awful stories and worse poems and songs, then college came along and I discovered free kegs and ten cent wings and my creativity was funneled into creating party themes. It wasn’t until I got my first horrible, soul-deadening corporate job that I got the itch to write. My good friend Norm Hendricks was writing a horror novel in the cubicle next to me and I got curious. Norm is the one who got me sucked into this, and I thank him all the time. It became an addiction, and I have no desire to kick the habit. Of course, it took me years before I wrote anything worth a damn, but that’s part of the journey.

2. As kids we’re always being asked what we want to be when we grow up. Beyond writing, what other careers did you have in mind for yourself?

From about 9 until 14, if people asked me what I was going to be, I would tell them a Playboy photographer (much to my mother’s chagrin – I think dad was proud). Then I wanted to pitch in the major leagues for a while, until college where I studied to be on the radio, either as a DJ or engineer. I’d secretly always wanted to do that ever since WKRP in Cincinnati came on the air. Once I realized how little the job paid, I gave that up. Funny how everything in radio has changed. Everything I learned back then is now obsolete. I was a master at splicing tape.

3. Really looking forward to reading your latest release We Are Always Watching.  While writing it, you mentioned to me that some of it’s based on real events.  Can you give more details on that? 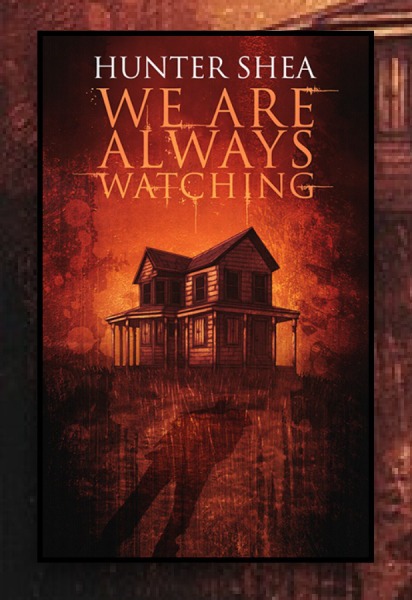 Sure. The whole idea was inspired by what’s still happening to this house in New Jersey. A couple bought a million dollar home in a sweet little suburb, only to find out someone who calls themselves The Watcher claims the house and all who inhabit it are his. The Watcher leaves cryptic, terrifying notes all around the house. The family picked up and ran for the hills. They’ve been trying to have the house razed but have been turned down by the town zoning board. They rented it out to someone else, who recently started getting even more sinister notes from The Watcher. Crazy stuff. And it’s scary, because it’s really happening.

4. You and Jack Campisi have a podcast called Monster Men over on YouTube. How did you two meet and what made you decide to create the show together?

We worked together at a technology company. When we found out we both owned and loved the Spider-Man rock opera album as kids, we were bonded for life. We loooove horror, and talked about it all the time. Once podcasting became a thing, we decided to just go for it and let the world watch 2 horror fans, who’ve had a few drinks, talk about the genre. We’re 120 episodes in and counting, which isn’t easy considering it’s a video podcast. 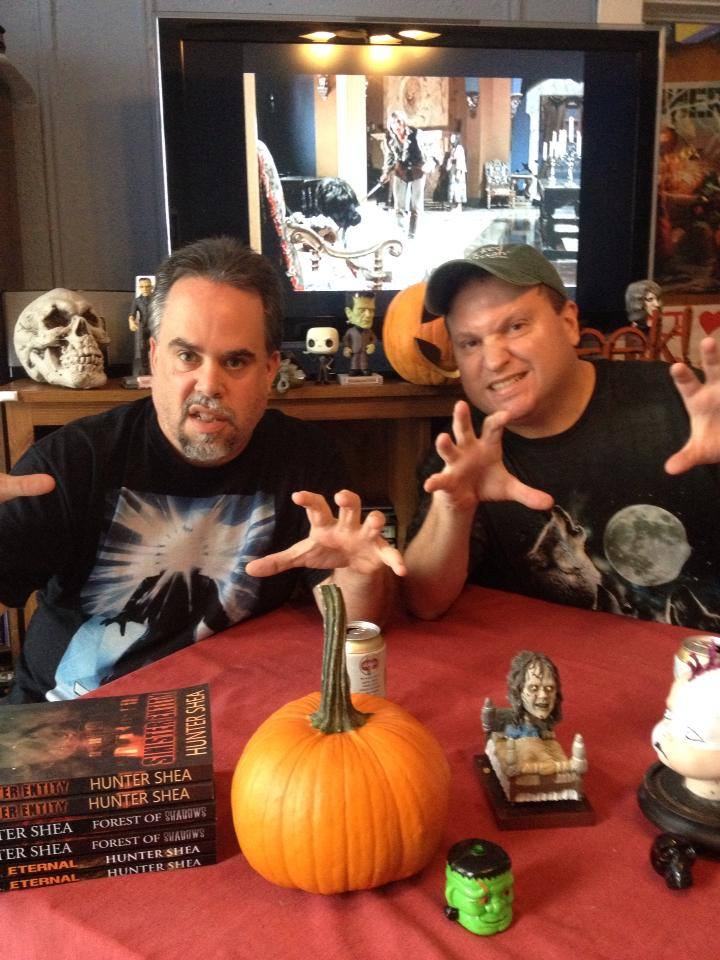 5. They say authors often put themselves into at least one of their characters in every book. Is this something you’ve experienced? If so, which of your characters do you feel most resembles yourself?

Oh, hell yeah. Bits of us are scattered like ashes across the pages of each and every single book. John Backman in Forest of Shadows was all me, complete with crippling anxiety (which I beat, unlike poor John). There’s a lot of me and one of my daughters in West Ridley in We Are Always Watching. Strangely enough, I’d go so far as to say you’ll find pieces of me in Jessica Backman in Sinister Entity and Island of the Forbidden. It’s impossible not to take from yourself and imbue it within your characters. It also helps give true notes of authenticity to the work. Readers know when you’re totally faking it and when you speak from experience.

6. What’s next for Hunter Shea? Can we look forward to more cryptid-based tales or are you going to go in a different direction for a while?

Oh, so much. This summer, my series of novelettes will come out through Lyrical Press. They’re based on the crap you could buy in comic books in the 70s and 80s. They’re called Just Add Water, Optical Delusion and Money Back Guarantee, and they’re pure campy fun. Megalodon in Paradise will be released through Severed Press this summer. Sure to be a pleasing beach read. I have a few other special releases up my sleeve. Folks need to stay tuned and see what’s in store. Hope you all hop on over to www.huntershea.com and join my Dark Hunter Newsletter to get the inside scoop. Oh, and I give lots of free stuff away to subscribers, too. 😉

Thanks so much, Hunter for taking the time to sit down and answer a few questions! It was great learning just a bit more about the man behind the monster madness!

Next month I’ll be grilling author Jason J. Nugent – low and slow with just a touch of lemon pepper!

Until then … Write On!