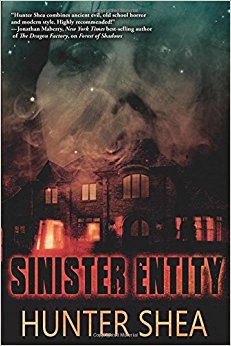 Even at the tender age of eighteen, paranormal investigator Jessica Backman has seen and experienced more than her fair share of things that go bump in the night. She’s always worked alone, until a series of emails arrives from Eddie Homes, a total stranger. Who is this clown and how has he learned so much about her? Jessica has always been very careful about keeping her privacy, but Eddie knows things he absolutely should not know. When Eddie tells Jessica that her dad sent him, she takes notice. Jessica’s father died horrifically when she was only six, and boy does Dad have a job for her and Eddie to do!

Sinister Entity is the prequel to the first Hunter Shea book I ever read, Island of the Forbidden. After reading this I’m just itching to get the first book of the series, Forest of Shadows. 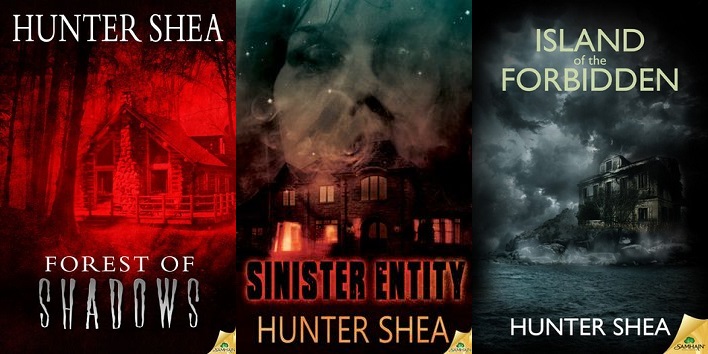 Whether he’s dealing with skunk apes that have run amok, zombies, the Jersey Devil, or a topic that seems so cliché and old school, like a haunted house, Hunter has an amazing talent of making it new again, adding his own twists, and drawing you into the characters and settings of each of his books. He could probably make a tin of Altoids frightening and thought-provoking. Sinister Entity is no exception.

I will say I did have a bit harder time getting invested in this one as I have his other books. Not sure why. It moved along quickly enough and the action was good, I just found my mind wandering off. That’s something I’ve never had happen before with a Shea novel. Maybe there was a bit more back story being explained than in others? Whatever it was, once I got through it, I was completely hooked and really had to know how Jessica and Eddie were going to tackle this particularly nasty and sinister entity.