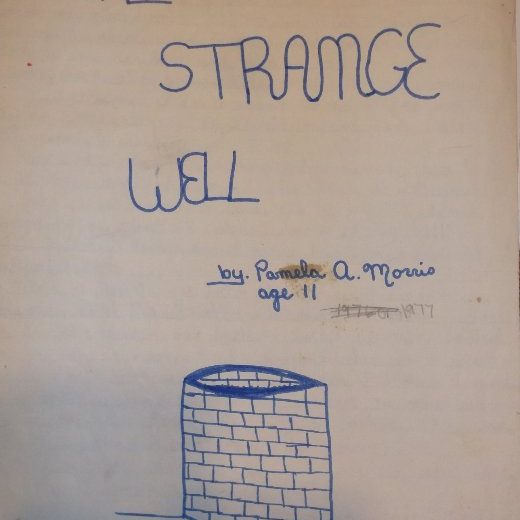 Author’s Note: Written when I was the ripe, old age of eleven, The Strange Well was my first ghost story.  The original hand-written manuscript survives to this day thanks to my father. He saved a lot of my writing from back then and for that I am eternally grateful.  In typing it, I’ve left it as written, spelling and punctuation mistakes included. I felt correcting them would take away some of the childhood charm. It’s a very simple tale and certainly has more than its share of flaws. Some of it doesn’t make sense at all, but it, along with the fully illustrated and adventurous story of Bill, The Worm Who Ran Away, written that same year, sets the stage for what would grow into a life-long passion for writing.

And so, without further adieu – the World debut of … The Strange Well.

“You’ll have lots of fun at your Aunt Martha’s,” said my grandfather. The reason I was going to my aunts because my mother and father had gotten into a car accident and died. I had to go to my aunts, even though I didn’t like her very much.

“But, Grampa, I don’t want to go, theres nothing to do there, all you do is sit around and watch television,” I said.

Well I finally got into the house. I didn’t see anyone, so I figured that she might be either upstairs or in the garden out back. I went upstairs, looked in all the rooms but she wasn’t there. So I went back down and out the garden. I looked around, there she was picking tulips next to the summer house. I ran down the hill to where she was.

“Aunt Martha,” I said in a quiet voice.

“Corry, my dear, don’t sneak up on me so,” she said, in a sort of startled voice.

Aunt Martha had sort of a musical voice. Nothing like mine, but everyone said I looked like her, same color hair and eyes that’s all.

“Well dear, you better get in the house. You’re probably very tired after that long ride,” she said. “I have a room all ready for you. It was my grandaughters room when she came to visit me.”

“What was her name?”

“Miranda Lee,” she replied, “come on lets get to your room.”

That night I couldn’t stop thinking about Miranda Lee. I couldn’t get to sleep at all that night. I worried about making friends and school. What would it be like? Would I make friends or not? I must of fallen asleep, because the next think I knew it was time to get up.

That afternoon while I was walking down the street and I happened to bump into a girl about my age. “Hi,” I said. “Who are you?”

“Hay, are you new around here, I never saw you here before?” she said.

“Ya, I just moved in with my Aunt Martha. Do you think that you could come up to my house for a little while?” I asked.

“Sure, my mother wouldn’t care,” she replied. “Lets go. I’ve always wanted to go into that house.”

That day we played games and went down to the summer house. There was something about this place that was strange. Then I saw it. The old well was gone. Aunt Martha said thats where Miranda Lee died. She was playing on the egde, fell in and drown. Then the well was full of water, not it wasn’t it only had a little bit of water in it.

“You know Sheala, my aunt said that every Saturday night Miranda growns something but she can’t under stand her,” I said.

“Really, Wow, do you think we could come out here Tonight and try to see what she wants, and give it to her?” she said.

That night we were both there, listening, waiting. Then right on time twelve midnight. The groans began. At first thats all it was, but then it became clear.

“Hay that’s the doll Aunt Martha said I could have. I’ll go get it,” I said.

When I came back, I threw the doll into the hole and the voice stopped.

“Well, I guess we did it,” said Sheala, “we won’t have to worry any more, right Corry?”

After that Sheala and I played and had fun. I want to her house. It was nice inside. School went fine. And I had a friend or two, or three. Miranda never bugged us again.