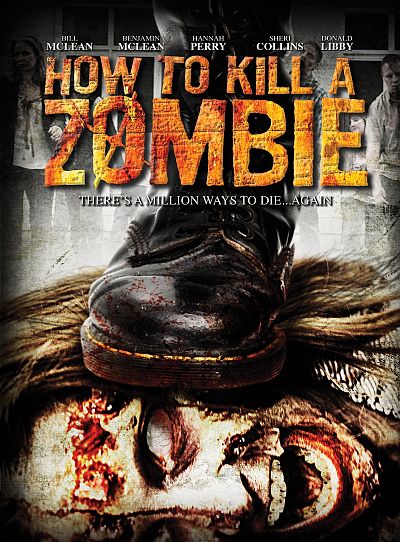 Armed-survivalist Mack Stone (Bill McLean) and his son, Jesse (Ben McClean) are on a training expedition in the woods of Maine when news comes over the radio that some sort of riot has broken out in a nearby city. Being hours away from the event, the two decide to call it a night and check it out come morning. Turns out this isn’t just any riot, it’s zombies and the closer Mack and Jesse get to town and to their at-home bunker, the more creatures they encounter. Jesse quickly starts taking notes on the various ways they are able to kill zombies that don’t involve a proper firearm. After rescuing a girl (Hannah Perry) armed with a shovel (which becomes #3 on Jesse’s list, by the way), the trio chances upon a building where a small group of trapped people are calling out for help. And this is where the story gets even better.

After “Killer Biker Chicks”, which was so bad I didn’t even bother to post a review for, I was pretty skeptical about “How To Kill A Zombie”. I was pleasantly surprised! Considering the subject matter, it’s very family friendly. There are some gory scenes, of course, but they are well done and not overdone. Whoever did the zombie make-up did an incredible job! The comedy is genuinely funny. We had many laugh-out-loud moments with the one liners and visual pranks. Best of all, there was a PLOT! Though far from professional, the acting was quite tolerable. It was pretty clear these people were having a lot of fun making this movie and I think that’s maybe what helped it along so much. They were having fun so we, the audience, had fun, too.