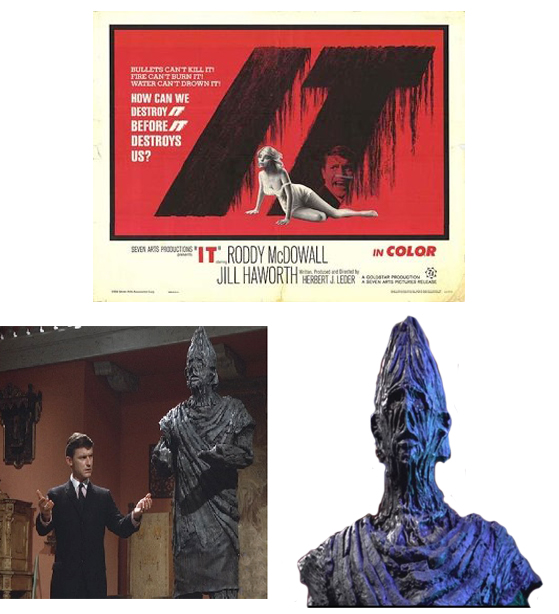 When a London warehouse burns to the ground, an unattractive stone statue is found unscathed amidst the rubble. It’s removed and taken to another museum under the care of assistant curator, Arthur Pimm (Roddy McDowall). On closer inspection, it’s found to be the 16th century Golem of Judah Loew ben Bezalel. Though the statue was meant to be used for good, the insane Pimm, finds the secret to bringing it to life and uses it for his own selfish and deadly reasons. He eventually regrets his mistakes and tries to destroy the Golem. In doing so, he loses what little control he had over it in the first place.

I am a lifelong fan of Roddy McDowall and love to watch him in anything and everything he’s ever been in, but this movie has a lot to be desired. It’s a shame his talents were wasted on the nonsense presented here. The first three-quarters of the film are actually not too bad, with McDowall playing the very Norman Bates-like character, complete with the dead corpse of his mother he talks to and keeps at his home. His unrequited love for Ellen Grove (Jill Hawthorn) and his clear jealousy towards the NY curator, Jim Perkins (Paul Maxwell) could have been used with a lot more depth, yet other than kidnapping Ellen at the end, Pimm really does nothing about any of it. And I’m still not sure why Detective Wayne (Ian McCullock) believed in the power of the Golem so easily and quickly. He took it as just a matter of fact almost without question. His by-the-way, Pimm-has-brought-this-thing-to-life attitude just feels very off and unnatural for a police officer.

The last fifteen minutes are lame and contrived. It was as if the director just ran out of ideas, dropped the ball and made a break for it, leaving the cast and crew to make up their own contrived and ludicrous finale. Sorry, Roddy. You know I love you, man, but this movie would have been best left off your list of acting credits. You’re better than this!

Three of Five Stars for Roddy’s performance. The rest is pretty much rubbish.