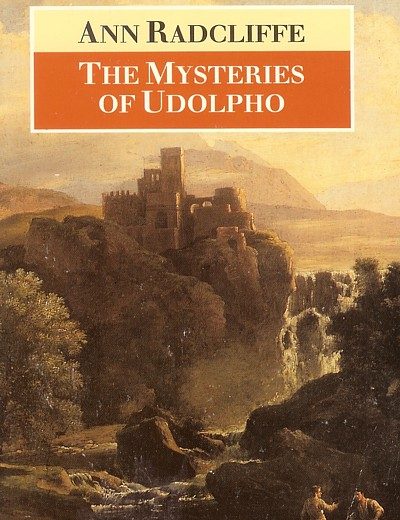 As a female horror author, I decided last fall it was high time I read what is considered to be one of the first Gothic novels written by a woman, “The Mysteries of Udolpho” by Ann Radcliffe.

My first encounter with Gothic literature came at around the age of twelve. I’ve always been big into vampires, and as luck would have it, my best friend’s brother had a copy of Bram Stoker’s Dracula that he was willing to let me have it. 19th Century novels are hard enough for most adults, but I was a determined reader and pushed my way through. I went on to read it at least ten more times over the years, each time understanding a little bit more.

From Stoker, I moved on to Poe, Dickens, and Hawthorne all on a voluntary basis, plus whatever reading of that period that was required of us for English classes such as Mark Twain. After high school, I discovered the likes of Willkie Collins, Emily Bronte, and Oscar Wilde. As a Civil War reenactor for nearly ten years, I wanted to learn more about the period based on the diaries which led me to the likes of Sarah Morgan, Rose Greenhow, and Mary Chestnut.

All this being the long-winded way of saying I am familiar with the ins and outs of 18th-19th century writing. Speaking of long-winded, let’s talk about the novel in question.

The Mysteries of Udolpho, published in 1794, takes us on what is now considered a typical Gothic adventure. A life of peace and happiness is shattered when young Emily is left a poor orphan and placed in the cruel hands of her nearest relative. In this case, an aunt. During Emily’s happier days she meets and falls in love with a handsome cavalier named Valencourt. But, alas, this love struck couple will not find it so easy to be married and live happily ever after. First, Emily must be torn from her native land of France to reside in Italy with her heartless aunt and uncle who want to marry her off to a wealthy friend who’s old enough to be Emily’s father. But, Emily’s heart has sworn allegiance to Valencourt and she’ll have no business with her elderly suitor. Next, she is removed to the isolated fortress of Castle Udolpho where, after the death of her aunt, it seems as if Emily is destined to suffer the same fate at the hands of her greedy uncle.

Getting to this point, unfortunately, took half the book and with a total of over 600 pages, that’s a long and somewhat tedious amount of reading. And yet, much like slogging my way through Dracula as a twelve-year-old, I persisted and emerged victorious. But, did Emily? Will she ever escape her treacherous uncle and the prison Castle Udolpho has become? Who is the mysterious male figure she keeps seeing at night moving about on the battlements? What of the female ghost-like apparition being reported by the servants and seen by Emily herself? Will she and Valencourt ever set eyes on each other again? I’m not telling!

Dark, brooding, and suspenseful, it’s easy to see how The Mysteries of Udolpho set the stage for so many other Gothic novels that would follow and why it was so popular with the ladies of its hay day. A tough read at times, but well worth the effort and satisfaction I got when I was finally able to close the covers knowing at long last, the eluded to mysteries of Udolpho.

Due to it taking half the novel to get to the good stuff, I’m giving it –