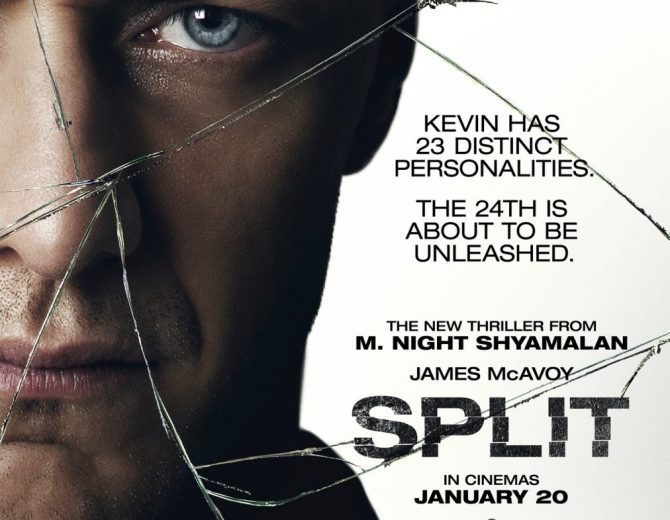 We’re told that Kevin Crumb has 23 personalities. Via four (maybe five) of his other personalities, two of which seem to have schemed together to kidnap three teenage girls, we’re told that the bad ass 24th personality, known as The Beast, is on his way. Kevin’s therapist, Dr. Karen Fletcher, starts getting emergency emails from the others pleading for help, but is then misled by the personality that shows up for the session the next day. Something’s not right and she knows it, but can’t quite put her finger on what’s going on.

M. Night Shyamalan usually does not disappoint, but this time I’m on the fence with just how much I liked or didn’t like this movie. The pacing as wonderful. The tension grew at just the right pace and James McAvoy did a pretty good job of portraying the personalities we meet. What disappointed me was the fact that those six personalities are the only ones we ever see. In fact, we never even meet the original Kevin until the very end. Why bother having the other 18 if we’re never going to be introduced to them? I felt ripped off.

The ending was somewhat confusing. I get that it is a reference to another Shyamalan film, but I don’t understand the connection. Maybe I’m not supposed to? Maybe I have to wait for a third movie to explain to me the link between these others? Either way, it wasn’t satisfying and I left the theater feeling a little let down with the whole thing.

Had this been something I’d watched on Netflix or Amazon Prime for a much less expensive price tag, maybe I’d have enjoyed it more.