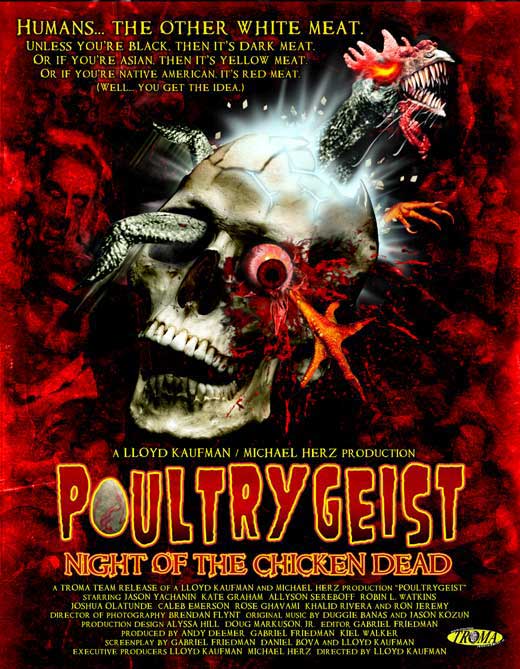 Fast food franchise, American Chicken Bunker, sets up shop atop a Native American Burial ground. Never a good idea. Not only are the locals up in arms over the sacrilege, but so are the spirits of those buried beneath and the carcasses of the chickens being slaughtered for mass consumption.

As my fellow viewer remarked, “[This was] the worst movie I have ever been unable to stop watching.” I’m not sure where to even go with this review. If you are easily offended by folks not being politically correct, you’ll want to pass by this one. Pretty much every race, religion, and sexual orientation is pushed to the limits of its current controversial stereotype. If you can let that kind of thing slide and understand it’s just a movie, you’ll be fine. Likewise, if images of explosive diarrhea and projectile vomiting leave you feeling queasy, again – you’ll want to skip this, or be sure to have a puke bucket near at hand just in case.

However, if you’re the sort that enjoys a bit of youthful T&A, folks getting dismembered in a variety of ways, gallons and gallons and gallons of blood flying sky high, campy comedy and even a bit of song and dance to help lighten the mood between horrific deaths, Poultrygeist may just be what you’re looking for. The special effects and make-up were actually pretty damn impressive. And who doesn’t love fried chicken … especially fried chicken with ‘flavor pods’? MM-mm-good.

As we sat there watching, it was remarked that this came out of someone’s mind. Which in and of itself is a terrifying thought. On top of that people invested in this; real money was spent to the tune of around $500,000.

It was certainly entertaining, but not in the way either of us watching expected it to be. It delivered at being a horror and a comedy. We were horrified and we did laugh. The musical element, well, not the best songs or choreography, but there you go. As for the soft-porn, meh … it really didn’t do a thing for me but then I’m neither a hetero-male nor a lesbian, so … do with that what you will.