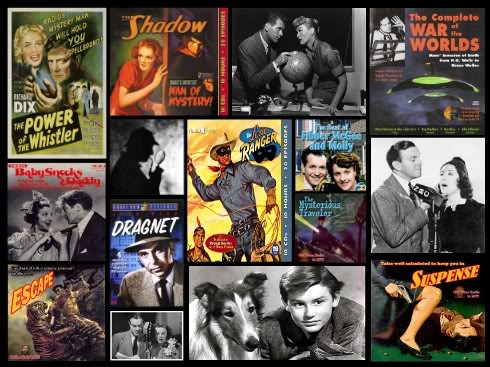 Remember when the radio was actually a source of genuine entertainment instead of something we just turned on for background noise; occasionally singing along while driving, doing housework, or puttering around in the garage? No? Maybe you’re too young, but back when I was a kid, and even more so in the days of my parents, radio was king. The air was full of radio waves that made us laugh along with Amos & Andy or Benny Goodman; or thrilled us with dramas like Charlie Chan or The Avenger. The air waves mystified, thrilled, and chilled us with such programs as Cloak & Dagger, Ellery Queen, and Radio Mystery Theatre. Cowboys like Hopalong Cassidy and The Lone Ranger carried young boys and girls off into the Wild West while Buck Rogers sent them into the future.

If you have never listened to radio theatre, you are really missing out. There’s a reason it’s called the Theatre of the Mind. Like reading, radio theatre requires you to use your imagination. Two people sitting side by side listening to the same program are going to experience the story differently and that’s part of the fun. You’re going to see the characters in your own way, the setting will be slightly different to your mind’s eye than your listening partner’s, and you may even interpret the story at a different angle. Personal experiences will color everyone’s interpretation differently. This, I think, is why very often you hear people saying that the book was so much better than the movie. When reading, you let your mind wander and create, just like with radio and few things, imho, can beat that.

Radio theatre, also known as audio dramas or radio dramas, began in the 1920s and became wildly popular into the 1950s. In 1922 The WGY Players out of Schenectady, NY introduced a method of radio theatre that would forever change the art of the craft. They began using music, sound effects, and a regular troupe of actors instead of just simply reading the listeners a story. Other stations quickly caught wind of this and followed suit. This expanded beyond the normal practice of putting on existing well-known plays to employing full-time writers to create original story lines. One of the best known radio programs, broadcast in 1938 by The Mercury Theatre on the Air, was an interpretation of an H.G. Wells classic, War of The Worlds. It’s still wildly popular nearly 80 years later.

Unfortunately, just like “video killed the radio star”, television killed off many radio stars and programs in the early 1960s. Despite that, some programs still remained and new ones were born. The creator of The Twilight Zone, Rod Serling, created a radio program called Zero Hour for the Mutual Broadcasting System, National Public Radio aired Earplay, and Himan Brown brought us CBS Radio Mystery Theatre and General Mills Radio Adventure Theatre.

Though it has suffered a huge decline since its hay days in the 1920s-1950s, new radio theatre continues to be made. Doctor Who, Dad’s Army, and The Tomorrow People have all been revived into radio programs. In the early 2000’s new episodes of The Twilight Zone aired with moderate success. Neil Gaiman’s Neverwhere was released in 2013 by BBC Radio 4 and featured a cast of well-known film and television actors.

Today, we have Podcasting whose programs are often serialized stories or discussions employing the use of music, sound effects, and a set cast of actors and/or hosts. The big advantage to Podcasts is that you can listen and download what you want to hear any time that’s convenient for you without missing anything. You don’t have to be sitting next to the radio at all! You can listen directly using any device that can store and play audio files. I will confess, I have nearly zero experience and know very little about Podcasting. I’m kind of old fashioned that way.

But on the bright side, I’m not so old and set in my ways that I don’t know how to manipulate my way around the Internet where I’ve found a plethora of sites offering me the old time radio programs my parents and I grew up listening to. For the past year I’ve been working my way through CBS Radio Mystery Theater which was a huge favorite during my early double-digit years. I’ve only gotten as far as 1975 so far. I’m thinking I’ll move on to Ellery Queen or The Whistler next. In either case, I don’t think I’ll suffer with a lack of things to listen to thanks to the amazing powers of the internet and the foresight people took to preserve these entertainment masterpieces.

So, pull up an easy chair, put on the headphones, check out the aforementioned links as well as those below, and take a trip into your personal Theatre of the Mind.