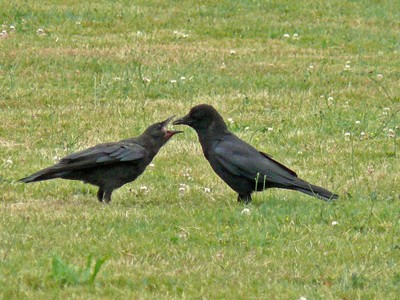 After years of dreaming, I have what I call ‘my crows’ now.

Saturday morning I tossed 1/3 of a bag of stale Cheerios out into the lawn, about 25 feet from the kitchen sink window along with three very blackened bananas. My hope was to entice the crows I’ve seen around, but that never seem to get very close. I had no idea if they were into bananas but the Cheerios seemed promising. I went out to the kitchen around 4:30 to start dinner and much to my delight, three crows were out there eating the Cheerios. Even better, it appeared to be a family unit of mom, dad, and baby though baby was just as big as mom and dad.

S/He kept hopping after one or the other squawking and open-mouthed while doing that wing-flapping FEED ME thing. Mom and Dad were having none of that. The food is right there, buddy. Help yourself! Junior was quite persistent until one of the parents had had enough of that nonsense, nudged its offspring rather roughly and flew away with an annoyed “Knock it off,” squawk. Junior seemed rather confused at this and turned around to find himself alone as Parent #1 had hopped off quite a ways during the ruckus. I’d like to say it was Mom that got pissed and stormed off, while Dad went about his business from a safe distance. Mom eventually returned and the family unit lingered a bit longer, one taking a few pecks at the offered bananas but otherwise, not much interest.

Saturday night I indulged in some popcorn and intentionally left a couple handfuls over to be put out in the same area as the Cheerios. Knowing crows are early risers, I’d planned on tossing the leftovers out early, but didn’t make it until around 8:30 or so. Way too late. Still, I remained hopeful and put them out.

Around 4:00, again, as I was doing some dinner prep, I looked out the kitchen window and there were ‘my crows’ checking out the popcorn, picking up more of the Cheerios and from what I could tell, still ignoring the bananas.

At 6:30 this morning while putting my lunch together and sipping coffee, I looked out. Guess who was there? Yup, “my crows” and I think maybe one was showing more interest in one of the bananas. Sadly, I had nothing new to put out before I left for work.  They are so much fun to watch and maybe one of these days I can be out there when they land and feed instead of 25 feet away and hidden behind two layers of glass. They’re pretty jumpy. One even did an impressive hop when my son coughed upstairs in his bedroom so this will take time.