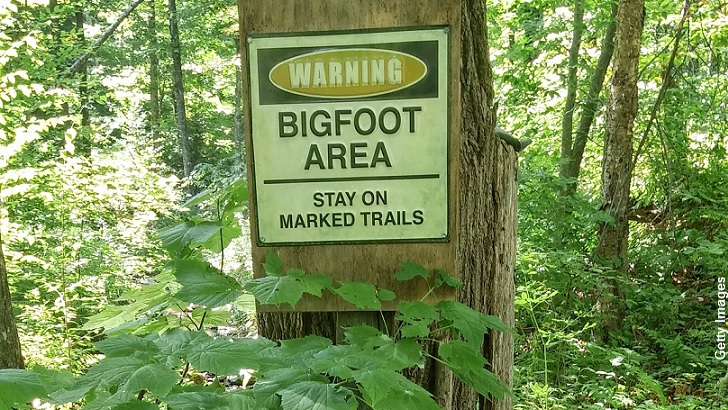 The 1970s was a, well, BIG decade for Bigfoot. It seemed like he was everywhere. On Saturday mornings we had ‘Bigfoot and Wild Boy”. Steve Austin took on a robotic version of the creature in The Six-Million Dollar Man, and of course, Leonard Nimoy went ‘In Search Of … Bigfoot.” There was even a Bigfoot board game where you got to track the elusive beast. But where Sasquatch really made his biggest imprint was at the movies!

When I learned about last month’s released of Boggy Creek Monster: The Truth Behind The Legend the spiral into the depth of my childhood and my love and fascination with all things Bigfoot struck anew.  I selected five films from those fabulous 70’s to either watch for the first time or watch yet again to remind myself how good or bad they really were.

And so without further delay, let’s begin our Bigfoot Binge!

Two buxom and scantily clad babes are kidnapped by a small band of Bigfoots (or is that Bigfeet?)… Anyway … One of the ladies is part of a motorcycle ‘gang’ and her boyfriend isn’t too happy about his girl being taken hostage. Having been separated from his biker friends because these two just HAD to stop and have a romantic interlude down by the creek, and unable to catch up with them down the road, Rick returns to the general store where the group last stopped. With the locals and law enforcement unwilling to believe the biker’s story, he enlists the help of two traveling salesmen who just happen to have rifles and flashlights on hand.

Eventually it’s all-out war as Rick’s biker friends, who have returned to lend a hand, two traveling salesmen, three Indians, and Rick all chase down the leader of the Bigfoot band to try and save themselves and the kidnapped beauties!

Even John Carradine couldn’t save this one.

The Legend of Boggy Creek (1972) – Directed by Charles B. Pierce. Narrated by Vern Stierman. Starring: The Fine Folks of Fouke, Arkansas as themselves.

In October 2014 on a return trip home from Texas, we decided to make a small detour to Fouke, Arkansas to realize a childhood dream, to see for ourselves where this movie was filmed.  As with many of our little trips, I wish we’d had more time to explore. As it was we were able to stop at Monster Mart and get a few souvenirs and pictures, but little else.

Told from the perspective of a young man growing up in the small town of Fouke, Arkansas, ‘The Legend of Boggy Creek’ always seems to stir up a lively conversation for people of a certain age who remember seeing it youngsters and being completely terrified by it. I am one of those people. The film is sort of a documentary, in that it stars mostly locals of the area telling and re-creating their lives during the time of the sightings.

I do have to wonder just how much of this is based on fact and how much has been over-dramatized or completely fictionalized to make it more interesting and profitable. Either way, it was realistic and creepy enough for an entire generation of people to never, ever forget it and to seek it out again for at least another couple of viewings as adults. This was without a doubt, the first Bigfoot movie I ever saw and I’m pretty sure it’s probably why to this day, I hate looking out my windows at night for fear of seeing someone, or something, standing out there looking back at me.

Additional movies, Return to Boggy Creek (1977), Boggy Creek 2: The Legend Continues (1985) and Bigfoot: Boggy Creek (2010) have all tried to capitalize on the story, but none were ever able to beat the popularity of the original. I am truly hoping the newest film mentioned earlier won’t disappoint.

Documentaries on Bigfoot (and a myriad of other cryptids) seem to have run rampant back in the good old 70s. In this case, the first fifteen minutes are devoted to the Loch Ness monster, before moving on to Bigfoot. Full of historic still photos, early captures on audio and video along with dramatized eyewitness accounts as well as statements given by the real witnesses, we are also told about other man-apes found throughout the world, Bigfoot as known by his many names worldwide, Yeti, Sasquatch, the Abominable Snowman, and Skunk Ape.

All in all, a seriously done documentary on what we knew and what was going on in the world of Bigfoot research in 1975. Though it’s a bit outdated, it’s still an interesting and informative watch.

I saw this movie for the first time when it came out in theatres. My grandmother had wanted to treat me to a movie and being the odd child I was, this was my pick. She wasn’t so thrilled with my choice, but eleven-year-old me thought it was totally awesome at the time! It left me scared for many years. As an adult viewing it again, okay, maybe not quite so much, but it’s still a fun watch!

Seven men head out on horseback for a three-month-long expedition into the wilds of the American Northwest in search of Sasquatch. Among them we have the obligatory Mountain Man, a Native American guide, and the camp cook who also happens to be a crack shot with a rifle and, along with some pesky raccoons and a badger, provides us with comic relief along the way.

In between the long stretches of very Disney-esque scenes that felt more like a nature show than a movie about tracking Bigfoot, we are told some frightening tales in the form of flashbacks about previous encounters with the infamous creature in the area.

Our intrepid group doesn’t reach their destination, the heart of Sasquatch country, until the final fifteen-twenty minutes of the movie, but boy do they get what they’ve been asking for in those final minutes.

Initially I was scared, very, very scared at what this movie might contain, being as it was brought to us by those same people who produced Poultrygeist: Night of the Chicken Dead. But, I took a deep breath and braced myself for whatever I was about to commit myself to.

This time around we’re hunting Bigfoot in the American ‘North Country’, in this case that’s Wisconsin, where Bigfoot apparently prefers to wear white. Or maybe they’re like certain rabbits who change the color of their fur to suit the seasons.

Two trappers make the catch of the century when they snare a baby Bigfoot. Mama Bigfoot doesn’t take too kindly to this, leaving one trapper dead and the other seriously mauled. Word quickly spreads and soon others are out hunting down these elusive beasts and, as we all know, no good ever comes of a greedy business man who wants to cash in on capturing Bigfoot, some angry, gun-toting hunters, law enforcement, a vengeful Bigfoot Mama, and a nearby ski resort.

I was surprised at how good this movie actually turned out to be. I’m not saying it was good. I’m saying it wasn’t absolutely horrible. The acting was pretty good and the plot was interesting enough to keep me watching to the bitter end. And, they very skillfully included a couple of kids in one of the side plots. This would be a good one to watch while up in your winter lodge on a dark and snowy night.

And there you have it, my lead up to viewing the newest film Boggy Creek Monster: The Truth Behind The Legend which, hopefully will be happening this weekend. Maybe even tonight! To learn more about this one, check out an interview with one of its creators, Lyle Blackburn over at the Monster Men Podcast on YouTube Episode #114 along with this trailer Boggy Creek Monster Trailer.