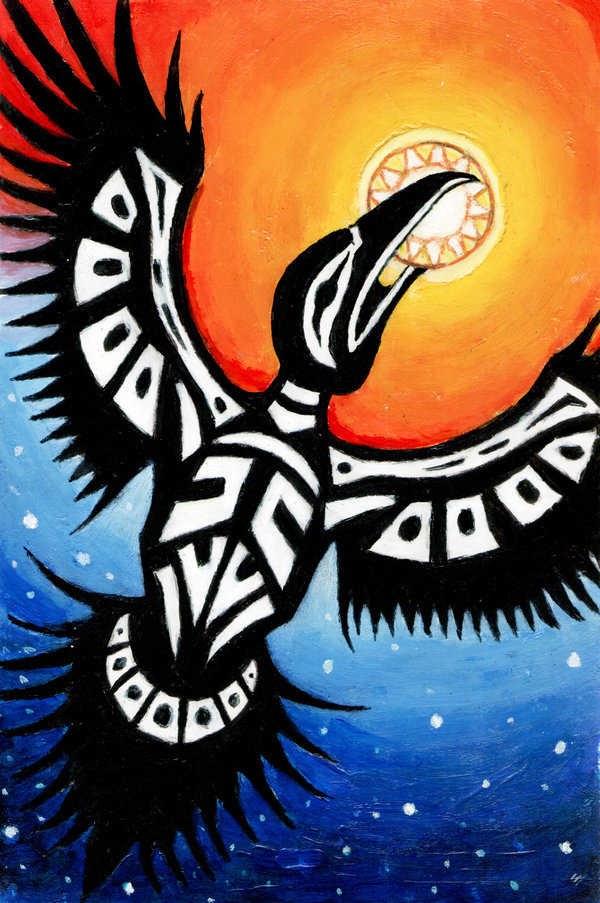 In the beginning the world was in total darkness.

Raven, a beautiful white bird that lived high on a remote mountain top and who had existed in this darkness from the beginning, grew very tired of walking and flying around running into things all the time. 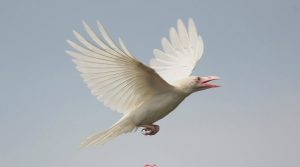 One day, Raven found his way to the home of an old man Medicine Man named Grey Hawk who lived alone with his daughter. Grey Hawk was not a very friendly man. He hated people and permitted no visitors. However, his daughter was very pretty and Raven, feeling sorry for her solitude, decided to introduce himself.

They quickly became the best of friends for Raven could talk as well as any person and the daughter was grateful to have his company. During one of their chats, Raven learned that the girl’s father had a great treasure. Hidden somewhere in the house, the greedy old man had a tiny box concealed within many other boxes that held the light of all the universe within. 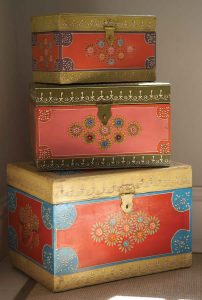 Immediately, Raven vowed he would steal this box and the light within.

Raven thought long and hard on how he would steal the box. He watched Gray Hawk day in and day out, learning his habits, where he went, and for how long. Finally, when he was certain he’d not be caught, he flew into Gray Hawk’s house. He looked and looked and found a box tucked under a pile of Buffalo hides. Being very clever, Raven opened one box after another, each one smaller than the last.

The smallest box sparkled from the inside out, unable to entirely hold all the light within. Raven knew then he’d found the one.  With it tucked in his beak, Raven flew as high into the sky as he could from the home, tiny sparks of light streaming from the box as he went, until he reached the secret mountain where he lived.

Looking back, Raven noticed that the pieces of light he’d spilled had risen high into the once totally black sky. Raven named them Stars. This was the first light.

Raven rested for the night and when he woke he opened the box. Inside he found a glowing ball of fire. It was from this Raven believed the sparks now called Stars had come. Raven grasped the ball in his beak and once more flew up as high as he could go to place the ball in the sky among the Stars. Because it was so much bigger, brighter, and heavier than the sparks that had fallen from it, Raven wasn’t able to get it as far. This he named the Sun.

By the time Raven returned home, the day had passed and the Sun had sunk below the horizon and the world was dark again save for the Stars. Raven returned to the box and found a second ball. This one was much smaller and not as bright. He took the ball into his beak and flew as high as he could. He placed it in the opposite side of the sky from the Sun so that it could be seen at night with the Stars. This he named the Moon. 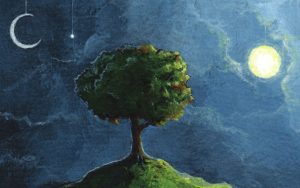 The next day when the Sun rose, Raven peaked into the box one more time. It still wasn’t empty. Inside was a stick that had been set on fire by the great heat of the Sun. Beside it, was a bulging water skin.

Remembering Grey Hawk’s daughter and how hard she worked to draw water up from the well, Raven took the water skin and flew out from his mountain. As he went, water from the skin fell to the earth, filling long gorges, deep basins, and meandering shallows. Rivers, oceans, and streams were created. All the People and animals that had once wandered in darkness and dug for water were grateful to Crow for all he’d done. Greedy Grey Hawk was not.

Grey Hawk was furious and had a plan of his own to get rid of thieving Raven once and for all. He couldn’t return the Stars, Moon, Sun, or Waters to the box, but he hoped he’d still be able to take Fire back. As Raven flew overhead to return to his mountain, Grey Hawk secretly followed him on foot. It was a long, hard journey for the Medicine Man, but he still had one more trick up his sleeve.

When night fell and Grey Hawk knew Raven would be sleeping, the Medicine Man climbed the great mountain where the bird lived. Near sunrise, he found Raven in a huge nest at the very top. In the middle of the nest sat the box from which glowed the light and heat of Fire. Raven lay with his white wings wrapped protectively around it.

Grey Hawk inched his way in, closer and closer, and was just about to snatch the glowing twig when the Sun rose full and bright. Raven opened his eyes and immediately saw the old man and knew what he was after. The bird snatched the burning stick from the box and took to the sky as fast as he could. It was then that Grey Hawk revealed his final secret. He transformed into an actual Hawk and flew after Raven as fast as his great wings would take him. 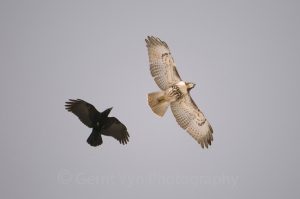 Raven was shocked! Grey Hawk was much bigger than him, but not as agile. Raven rose and fell, darting left and right, doing all in his power to out maneuver his foe. As he flew, smoke from the twig blew back, coating his once white wings until they were completely black. Raven didn’t care.

Hawk chased him still, snapping at the fiery twig and Raven every chance he got. Raven darted down between some rocks and accidentally dropped the twig. Fire fell even faster than Hawk or Raven could fly to catch it. It struck a pile of rocks, darkening them instantly then was snuffed out, seemingly lost forever.

The two birds screamed, squawked, and cawed at each other in rage! On seeing how the once beautiful white Raven was now as black as the sky had once been before stealing the treasure, Hawk laughed. “Now you are a black and ugly thing of darkness. No one will ever love you again!” the Medicine Man shouted. And that, he figure, was punishment enough. He flew away, thinking that no one would ever admire Raven for his beautiful plumage again.

Raven didn’t care. He’d given the People the Sun, Moon, and Stars. He’d given them the Oceans, Rivers, and Lakes. But he was sad he’d not been able to give them Fire, too.

Many long days and nights passed and eventually Raven began to miss the old man’s daughter. He hadn’t dared to visit her in all this time, fearing the Medicine Man would try to kill him. But, one day he could stand it no more and flew from the mountain, down into the valley, and came to rest in a tree by a sparkling stream near where she lived.

As luck would have it, she was just coming from the cottage with a large kettle full of water in her hand. Raven waited and watched as she carried the kettle to a pile of sticks stacked nearby. Next, she pulled out her dagger and a shiny black stone. The daughter crouched, scraped the steel edge of the dagger to the stone and sparks flew into the dry tinder. Within minutes, there was a fine fire for cooking.

Too curious to stay away any longer, he swooped down.

The daughter was delighted and surprised to see Raven as Grey Hawk had told her Raven had been killed. Raven told her all that had happened and then about how he’d lost Fire among the rocks. The daughter laughed and said, “No, it wasn’t lost at all.” She showed him the rock and knife and how when the two were rubbed together, they made fire. “So you see, you gave us Fire, too!” 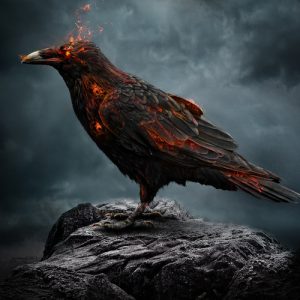 To this day, Raven and Hawk remain enemies and you can still see and hear them fighting in the sky. And despite having lost his white feathers, Raven is much beloved by the People for it was he who brought them so many good things.

Author’s Note: I make no claims to the originality of this tale, only in the creation of this particular version. I’ve based it on several other pre-existing stories.