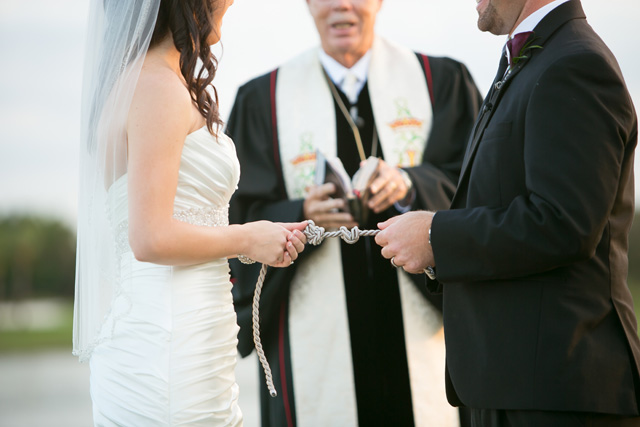 As a writer, I ponder not just words and how to string them together into some sort of interesting and entertaining tale, but the meanings behind certain common words and phrases. I’m in the beginning stages of planning an August wedding and in keeping with that theme, my thoughts have turned to “Tying The Knot”.

Some sources say the expression came to us from the ancient Roman Empire where the girdle of the Bride was bound into place with many knots by her attendants. It was the task of the Groom to untie those knots on the wedding night so the union could be consummated. Celtic Pagans have long referred to their wedding ceremony as a Handfasting in which the right hands would be fastened, or ‘fasted’ together in some way. Another origin suggests that soldiers and sailors who spent a lot of time out to sea and of which a majority were illiterate at the time, would send a piece of twine to their intended as a way of proposal. Should the lady return the string tied in a knot, the answer was ‘yes’. In Hindu traditions, the Bride and Groom would tie a necklace of flowers together to finalize the marriage.

From The Codex Mendoza of 1434, we find an image titled Aztec Marriage Couple depicting a man and woman seated on a mat. The Bride is powdered with yellow earth and adorned with red feathers. The wedding, which took place in the Groom’s home, was finalized by the couple having their wedding garments literally tied together.

Circa 1225 in The Legend of St. Katherine the word ‘cnotte’ was used to mean the bond of matrimony. “Swa ye cnotte is icnut bituhhen unc tweien.” roughly translated to mean, “As we are fastened and tied together, so the knot is knitted between us two.” Actual knots have been used in wedding ceremonies for centuries with the tying of the wrists of the Bride and Groom with the use of twine and sashes. Sometimes the sash or twine is merely wrapped and draped over the wrists. Other times a lose knot is created.

According to The Encyclopedia of Superstitions by E. & M.A. Radford, in the 17th century there was the tradition of placing pieces of knotted ribbon, always blue, to the Bride’s gown. These were sewn in place with a single stitch and the lucky reception guest who was able to get one of these ribbons would then wear them for good luck. T. May wrote in The Heir in 1620, “The happy knot you tie, Concludes in love two houses’ enmity”. This was followed by “You meane to tye the knot, nothing but Death is able to vundoe.” in 1621 by J. Shirley. Even Shakespeare used the metaphor in his famous play, Romeo and Juliet. “Send for the Count. Go tell him this. I’ll have this knot knit up tomorrow morning.” In other words, there’s going to be a wedding in the morning.

In 1717, the English poet, Matthew Prior used the phrase, “So to the priest their case they tell: He ties the knot.” in his poem Alma: or, The Progress of the Mind.

The 1811 edition of The Dictionary of the Vulgar Tongue included the example “He has tied the knot with his tongue, that he cannot untie with his teeth: that is, he is married,” to define the term, “knot tied with the tongue”. Like so many others, Jewish tradition also has a long history of using knots during a marriage ceremony. In January 1826, The Wilmingtonian And Delaware Advertiser reported on “Miss Rothchild’s Marriage” with, “At an early hour on Monday morning, Stomford Hill, the county residence of N. M. Rothchild, Esq. was in a great state of  bustle, and most of its inhabitants were in qui vive, waiting the approaching hour when Hymen was to tie the knot of a son and daughter of the house
of Judah.”

Clearly, the symbolism of knot tying to represent a strong bond or unbreakable pledge has had a place in history and folklore for centuries and spans many cultures. From illiterate sailors to the wealthy Rothchild family, tying the knot stretches not just through the years, but across the classes. This, to me, shows the power and deep meaning of what true love and a marriage should be all about. When you tie something into a knot, you want it to remain in place. You want it to be strong. You want it to last. Knots are powerful symbols indeed, and what better symbol to use when making a vow that’s intended to last a lifetime?