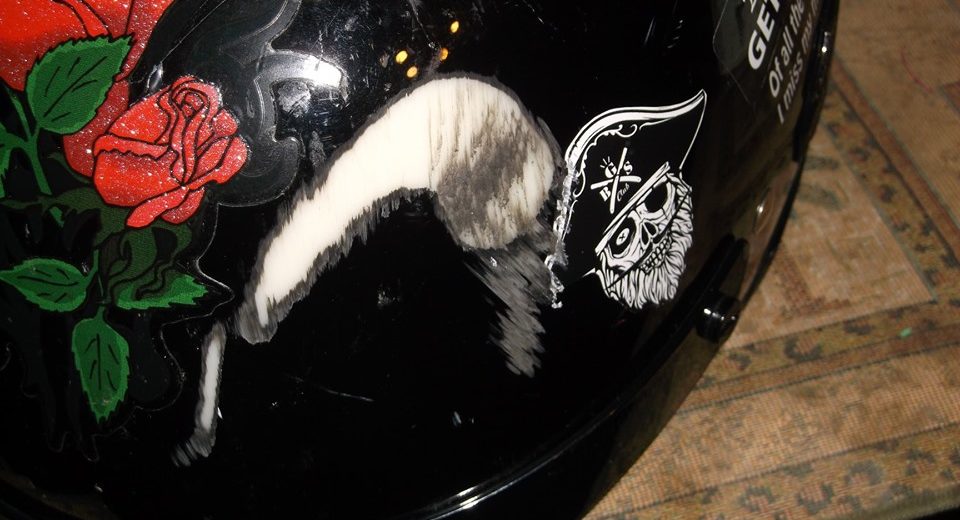 It’s been far too long since I made a blog posting, almost a month! Yikes! I have a really, really good reason, though.

On July 13th my husband and I took part in the 11th Annual Vietnam Veterans Memorial Highway of Valor Tribute Ride – phew, that’s a mouthful!  Anyway, it’s a 100 mile motorcycle ride that runs the length of Route 38 from Owego NY – Hannibal NY.  We had a great ride up. This was our first time and I was so surprised at how many spectators there were along the route, town after town. There were families sitting in lawn chairs, people waving American flags, and color guard units stationed at attention as hundreds of motorcycle road through. At the end of the ride was food, music, beer, and a few vendors. The weather had been perfect all the way and promised to be fine for the ride home.

At around 4:00, we decided to head back home.  At around 4:30 – all that came to a crashing halt, literally. I heard my husband shout, “Shit! A stop sign!” and felt the bike shift and heard the squeal of brakes. Next thing I knew, I’m apparently in the middle of the road on my back. I hear someone say something about calling 911. Sirens follow. A woman’s voice says, “I’m an EMT.”  I asked about my husband; is he okay? I’m told he is and that he’s in an ambulance behind us.

Instead of that day’s journey ending back home in our own garage, it ends with us at Upstate Medical in Syracuse. Broken bones, dislocated joints, a concussion, lots and lots of pretty bad road rash which, even after almost 2 months, we can still see traces of. We stayed with my parents for a week after my discharge on July 17th. I’ve yet to return to work. That happens next week. So much for all those summer plans.

On the bright side, we’re alive! We’re banged up. We’re still in pain. There’s a least one surgery to be had before the year’s it out, but WE ARE ALIVE. And we will ride again… but likely not this year. The bike can be fixed but its repair is low the list of things to pay for right now.

For almost a week, sitting at a computer wasn’t even possible. Eventually, I was able to sit up and  check my emails, Facebook, and Twitter, but only for short periods, an hour, maybe two, tops. Most of the time was spent sleeping, watching TV, waiting for the magic hour to take more pain pills, figuring out how the hell to take a shower with only one good arm while the other side of my body throbbed and shrieked in pain, and stopping everything when the room started to tip and spin from the concussion.

It still took at least another couple of weeks before I could sit at the computer long enough to even consider writing fiction. My brain wasn’t ready, quite honestly. I’d had a blog post written up for awhile and then seemed the perfect time to post it. Vanishing for who knows how long didn’t seem like a good idea. Eventually, however, fiction writing started to happen. Ideas came trickling in. My first try was only a couple hundred words, but it was progress. Progress beget progress and now I see light at the end of the tunnel. Another first draft is almost done.

On one hand, I want to get back to work, the day-job. I miss having people to talk to and interact with throughout the day. Plus, I’m running out of medical leave to supplement disability leave so I can draw a full paycheck! I hope I am able to do my job when I get there. Parts will be pretty difficult and I’m going to have to find alternative methods for sure.

On the other hand, I’ve liked having all this time to write and do other things. The only problem with that is there’s still so much pain and limited mobility in my left arm and shoulder. It’s hard to have fun when your body keeps saying, “Oh no you don’t!”

So – what other than writing have I been up to these past almost eight weeks now?

I got the rights back to “No Rest For The Wicked” a couple weeks before the accident and we were able to get a new cover designed and the whole things reformatted recently. You can find links to this beauty below.

I’ve been reading Stephen King’s “The Outsider” which is totally awesome! Murder-mystery meets Horror. Right up my alley.

We also celebrated our 3rd Wedding Anniversary on August 27th with dinner out to Texas Roadhouse.

Last but not least, I was recently interviewed by Sue Rovens of Plump Toad Press. https://suerovens.com/meet-greet-author-q-as/

There you have it, a rather unconventional version of What I Did On My Summer Vacation. Let’s hope and pray next year’s plans are a whole lot LESS painful and a whole lot MORE enjoyable.

How was your summer?