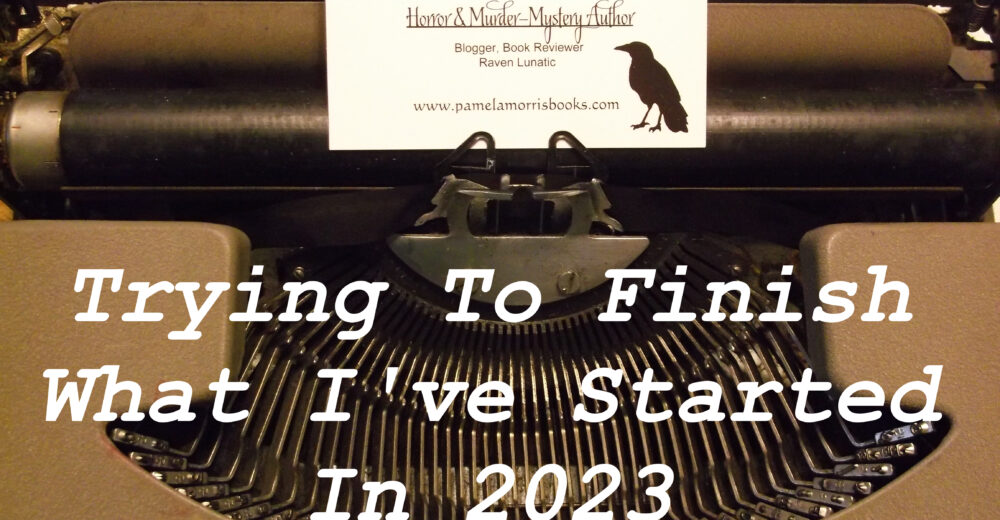 I haven’t posted much about what I’m working on lately but rest assured, I’m working on things – just not finishing much! With the new year upon us, it’s the perfect time to fill you in on what may, or may not, be released into the wild and unknown we call 2023.

Mainly, I’m trying to focus on the next Barnesville Mystery. I haven’t released a new Barnesville book since The Witch’s Backbone set back 2019! Made progress on Death At The Devil’s Elbow over the past week. My hometown family and friends will know exactly where The Devil’s Elbow is in the real world. Over the past week, I’ve added 10K words to that piece so I’m pretty happy with that. For those that don’t know how that translates in the novel world, the Barnesville titles run about 100K. I’m at 70K now, so … getting there! With this title, I’ve gone back to the original premise of the Barnesville books; murder, mystery, and the paranormal, all within the realm of a small-town cozy. Lordy, I’ve not written a murder-mystery since That’s What Shadows Are Made Of in 2015! Like “Murder She Wrote” but with magic and witches and ghosts and any number of supernatural creatures. With ANY luck at all, it MAY be ready by the next Blueberry & Books Festival in July! I make no promises with that, but it’s not outside the realm of possibilities.

My second project, is another collection of twisted fairy tales. Got some great reviews for the first one, Not Your Grandma’s Fairy Tales, and it’s inspired a few more. I’ve finished writing three of them, with four more in various stages of progress. Last night I came up with something along the lines of Cosmic Horror (think HP Lovecraft). I’ve never written in that Horror sub-genre before, so we’ll see how it goes. These short stories are a lot fun, and with them I’m working to expand my comfort levels with other genres beyond Horror. If you’ve read Not Your Grandma’s Fairy Tales you’ll know there was some Fantasy and Sci-Fi in there, too. It’s possible this will come out in 2023, but as the novel is my priority and I work on short stories only here and there, it may not be ready until 2024.

Last, but far from least, my next Children’s book, Wacky Jackie. I’d hoped for a December release but ran into some issues and had to do some creative reformatting. Like the next Barnesville Mystery, this has been a long time coming, but soon, my friends, soon! Wacky Jackie is about this wonderful woman who truly dances to her own beat. She thrives on being her best, most unique self with a life motto of, “Dare To Be Different.” Updates on Wacky Jackie will take place on my Friends of Bill The Worm page on Facebook, so be sure and head over there, like, and follow if you’re interested in all of that. As for Bill The Worm, himself. Will there be more books staring this wondrous worm? Short answer, “Of course, but probably not this year.” I have several ideas for new Bill The Worm releases, including an activity book, but this all takes time and a whole of drawing! Perhaps 2024 will be another big year for Bill The Worm. Though, he IS a friend of Wacky Jackie so maybe you’ll see him somewhere sooner than you think.

What I’ve Been Reading:

On our last trip to Texas in late November, Jim and I discovered the joy of Audiobooks. It’s not really reading as far as I’m concerned, but still book-related. We got through Scott Westerfeld’s “The Uglies”, Cormac McCarthy’s “The Road”, and are well into Jonathan Maybury’s second Pine Deep book, “Dead Man’s Song”.  As far as real reading, I’m dreadfully slow. I’m just over halfway through “Heart Beast” by Tanith Lee that I picked up at a used bookstore back in late October. I have nine more books on my To Be Read Pile and with any luck at all, maybe I can get through them this year.

What I’ve Been Watching:

We recently got around to watching “Wednesday” on Netflix. I’m hoping for a second season. And, believe it or not, I finally watched “Thelma & Louise” for the first time! Not Horror, but dang, an amazing movie that I’m so glad I finally took the time to watch.  Of course, with this being New Years and all that, I turned to SyFy and watched as much of The Twilight Zone marathon as I could. I’m always amazed at how I can still see episodes I never remember seeing before. I’ve been watching this show since I was little and every year since SyFy started doing the marathon 28 years ago! I was even able to catch one of the new episodes hosted by Jordan Peele in 2019. So, that was cool.

In conclusion – 2023 looks promising and I remain hopeful to get something new out there. Thanks to everyone who has stuck around with me all these years. Hang in there a little while longer and I’ll deliver what I can as soon as I can. Happy New Year. May 2023 bless you with new opportunities, prosperity, happiness, creativity, and at least one dream coming true.