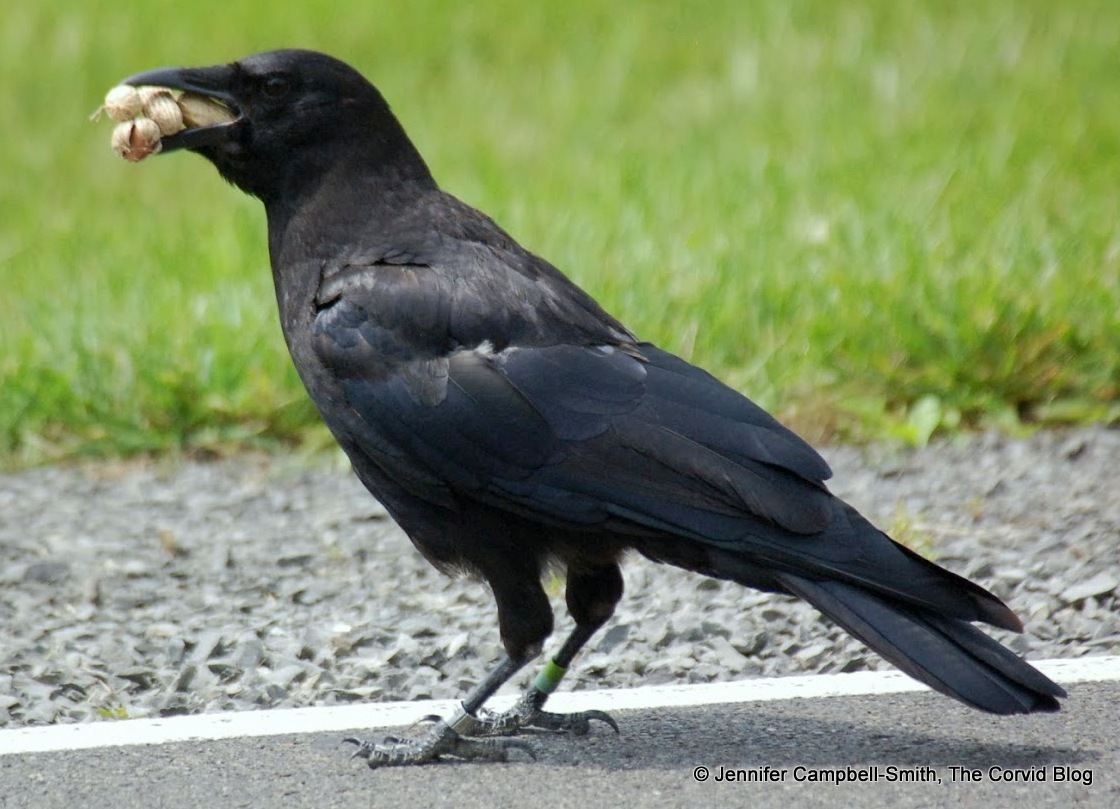 If you’ve been following the blog for a while you’ll know I’ve been working on making friends with the small murder of Crows that resides near my house. And what better way to befriend a wild animal than to feed it?

Last year I noticed they were over at the neighbors quite often, eating under her front pine tree. Not sure what she was putting out there, but I was eager to have some ebony-winged visitors of my own. After some research I found out that they really like peanuts in the shell and pet kibble so started tossing a bit of that into the side yard between my house and said neighbor.

It didn’t work all that well. The Crows would come, but they acted very, very uncomfortable about the location I’d chosen. I suspect it had to do with the big forsythia bush and the woodpile being fine places for cats to hide. Especially after I saw our local prowler out there lurking in the bush, eyeballing the array of bird feeders my son maintains.

After some consideration, the feeding spot was moved to the back corner of the property, some twenty feet from the new deck we put up just before the wedding in August. Not so many hiding places for the cat and a comfy place for me to sit and watch my future feathered friends should they ever got over their obscene level of paranoia.

More research had taken place between the start of the experiment and then and I’d learned to use some sort of call every time I went out to scatter the goodies.  I considered an actual Crow call, but was quickly talked out of that idea when my fellow Corvid enthusiasts said it probably wasn’t a good idea if I lived in an area that permitted Crow hunts. Sadly, I do. In fact, I pretty much refuse to patronize a certain bar in nearby Pennsylvania because they sponsor a Crow hunt every year. Shame… it’s a nice bar, but I just don’t feel right giving money to a place that encourages the senseless killing of my totem animal.

Be that as it may … the feeding place was moved and in a way I allowed the Crows to train me at first. I’d wait until I heard them cawing away in the front maple tree. That told me they were nearby and that they’d see me, unless they flew away, of course, which they did for awhile. Thus, leaving the peanuts to the ever-vigilant Blue Jays instead. Blue Jays are Corvids as well, so I can’t really get too annoyed at them for being clever like that. From my studies, I knew the Crows watched the Blue Jays, so I’ve let it slide and besides, running back out there shooing away the Jays won’t encourage the Crows that it’s a safe place to fly down and feed.

Since returning from our honeymoon, the tactics have been changed slightly. I’ll sometimes still go out if I hear the Crows in the tree, but not always. And when I do, I’ll look to see where they are – usually in the front maple watching and waiting – give the whistle, rattle the plastic dish, then toss out the goodies. I want them to associate that whistle with food, Pavlov’s Crows, if you will.  Just this past week, I’ve found that I can go out on the back deck, shake the dish and whistle and eventually, the Crows will arrive. It’s slow and not always guaranteed. On Saturday I went out three times and when no Crows came the first two times, I went back inside after fifteen minutes without putting the food out. This did not sit well with the Jays, but they’ll get over it, I’m sure.

My third attempt was a success. Maybe the first two times they just weren’t within hearing range of the whistle, but the third time, within ten minutes after stepping out the back door and whistling, the first Watcher Crow came to perch in the maple before moving closer to pine beside the one I feed them under. I waited a bit, whistled again and then another showed up. Of course, the Jays were already bouncing around in the tree oh-so-eager. I’m surprised they don’t dive bomb me while I have the dish in hand.

Knowing the Crows won’t come down until I walk away, I had no choice but to toss out the nuts and kibble. They had seen me, they heard the whistle, they knew I had the food and well, it was up to them to get rid of the Jays if they wanted to get any of it.

They are getting braver and don’t fly away quite so quickly as they used to when I step out. In fact, the Watcher Crow doesn’t even move from his perch now. He, well, watches. When he deems the coast is clear, then they will come down and feed. And, when I first started there were only three Crows. This weekend, there were four. Maybe Jr. got himself a girlfriend?

It’s going to be tougher now with the time change in effect. Crows go to roost before sunset and now I won’t be getting home from work until after that. Kind of sucks. This leaves me only the weekends or days I have off to try and call them in. I’ll keep at it though and post another progress report in a few more months… sooner if something phenomenal happens!