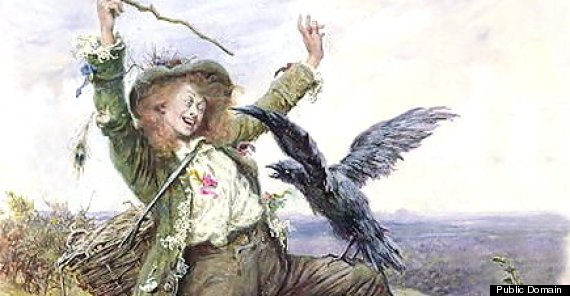 I found out something very cool this morning, but we’ll get back to that in a minute.

I don’t have much interest in any other birds, but my fascination with crows and ravens goes back decades. I don’t know when it started or why. It’s just one of those things that has always been a part of me. I can sit and watch them for hours. I love the sounds they make. I hesitate to call those sounds songs, but when they get to talking amongst themselves it’s a very cool listen. I’ve learned the difference between the two and it always annoys me to no end when they are featured in scary books and movies as nocturnal creatures. They aren’t. In fact, Corvids are one of the first birds to head to their roosts at night. Don’t even get me started on the ignorant idiots who go on crow hunts believing these birds are attacking and killing their farm animals. What a crock of bird shit! Crows and ravens ARE NOT raptors, people! They aren’t birds of prey. They don’t attack lambs, or chickens, or new born calves for Pete’s sake. Do some research!!! But, I digress.

As part of my final for a public speaking class I took in high school, I read Poe’s The Raven, as you would expect. I’ve featured the crow and raven in my first published paranormal murder-mystery, Secrets of the Scarecrow Moon (formerly known as Blood of the Scarecrow) and though the birds DO appear at night, it’s for very abnormal reasons. I’m told one of my uncles had a pet crow, of a sort. It wasn’t caged or anything, but apparently he’d rescued it at a young age and for quite some time it hung out with the family and would allow them to hand feed it. I really need to get a raven tattoo!

As a fan of horror, I am also a fan of Edgar Allen Poe. When I did the whole U.S. Civil War reenacting thing I had several small books I would sit and read appropriate to the time period. A selection of Poe’s short stories was the most popular one for me to pick up. I’ve yet to get to Baltimore to check things out, but it’s on my Bucket List.

I’ve read a fair amount of Dickens, too. Although, truth be told, Wilkie Collins is by far my favorite Victorian-era novelist. If you haven’t read anything by Collins, I strongly suggest you do. Not only were Collins and Dickens each others contemporaries, they were also friends and worked on several theatrical pieces together. We can’t forget about good old Bram Stoker either, can we? And the first novel of that period I ever read, Dracula, at a mere ten-eleven years of age. I’ve read that bad boy a good ten times and am way overdue for another go through. They wrote differently back then. It’s a style I greatly admire.

So, what does all this have to do with what I found out this morning? It seems that Charles Dickens acquired a pet raven in the name of research (yeah, we authors go to interesting length in the name of research). This bird in turn inspired Edgar Allen Poe to write The Raven. I thought it was cool anyway and worthy of sharing. Check out History Buff’s article HERE to learn the whole story!

Now, if you will excuse me, I need to go get more caw-fee.