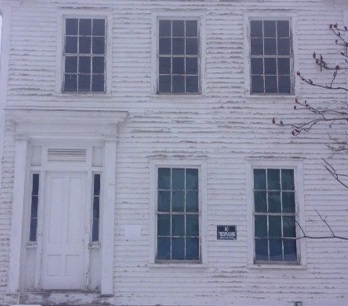 When last we met, I was leaving the property of an old brick mansion once located just outside of Watkins Glen, NY, contemplating a 1990s adventure in Urban Exploration (UrbEx) or if you prefer Urban Spelunking. This particular trip left a lasting impression and raised several questions to which I still do not have answers. But, thanks to my overly-active imagination, I was able to make one up and use it as part of the creation of my upcoming novel Dark Hollow Road.

Spelunking is ‘the hobby or practice of exploring caves’. Urban Spelunkers commonly explore empty and abandoned homes, mansions, hospitals, factories, and the like regardless of No Trespassing signs. Though they are breaking the law, UrbEx-ers also have a certain code of respect for the places they enter. Unlike vandals, UrbEx-ers are there to document, not destroy or tag with spray paint. It’s considered a big no-no to take anything from the buildings or former homes. If you do touch something, you put it back where you found it. You leave with the experience, still photos, video, and nothing more no matter how tempting it may be.

And, oh man, were we tempted exceptionally hard one summer day in yet another grand home just north of Watkins Glen.

Unlike the previously mentioned brick house, this white, Greek Revival home was anything but empty. We found it during one of our many drives in the country, seeking out old cemeteries and abandoned homes to explore. This time, we had a few friends with us. Drawn curtains obscured our view from the outside. Someone tried the front door. Locked. A door on a smaller side wing, also at the front of the building, had a padlock on it, an open padlock. Bingo.

We were instantly awed and nearly speechless. The first room was filled with glass showcases and displays containing one antique item after another. Had we just walked into a museum or something? Though a bit on the dusty side, it was pristine and carefully laid out. There were even labels on many of the items stating their history.

After this room, we went into the main part of the house and became even further enthralled. It was as if we’d walked into the late 19th century. Here was a kitchen with a cast-iron cook stove and hand water pump at the sink. A prep table for cooking, glass jars filled with canned fruits and vegetables in the cupboards, cutting boards, and mixing bowls waited the cook to return any moment. The dining room table was set with white lace and china, crystal and silver. A buffet lacked only to be filled with steaming plates of food. We passed through a servant’s quarters where a pair of well-worn shoes had been placed beside a narrow bed with thin blankets. Upstairs, the owners sleeping chambers proved much more opulent. Clothes even hung in the closets. This was completely unbelievable and slightly insane.

During this surreal visit, that sixth sense of mine kicked in. Each time I walked through the dining room this almost overwhelming feeling of being watched would prickle the hairs on my arms. It was so strong that I could barely remain in that room. The room felt cold, heavy, and wet, making it hard to breath. I felt dizzy and disoriented and all around creeped out. I’m convinced we were being scrutinized by the ghostly inhabitants of the place as they made sure nothing was taken. What they would have done had anything been stolen, I don’t want to guess. Karma is freaking weird like that and I’m not taking the chance.

We stayed maybe twenty minutes before heading back out, undiscovered and as far as I know, empty handed. In the days that followed one of our number found out who the owner was – who verified that the building had once been a museum open to the public – confessed our visit, and told them about the padlock. The lock was quickly replaced and properly locked. Unfortunately, far too many people don’t have the respect or self-control we had that day.

Fast forward to 2011 and a new TV show called “Haunted Collector”. The creator, John Zaffis, is a paranormal investigator who collects items that he and others believe to be trigger objects for all manner of haunted activities. The premise is that any item can hold the memories and emotions (both good and bad) of its owners. It can be anything from a painting to a ring, an old, rusty toolbox or a gun possibly associated with a murder. Zaffis and his crew hunt these items down and theorize that by removing them from the property (with the permission of the current owner) they can end the paranormal activity.

It works for them, but what if the reality of the situation has the complete opposite effect and not on the home owner, but the person who took the item? I’ve heard many cases of people taking trinkets from places and finding themselves haunted or even possessed by the spirit who holds that seemingly useless item in very high regard. Is that a risk you, as an Urban Spelunker, are willing to take? Is that little chipped teacup or battered old postcard worth risking your life or sanity over?

Welcome to rural Pennsylvania and the Brown resident, the only house on this side of Dark Hollow Road. Since the flood of ’72 and the washing out of the bridge, Dark Hollow Road has been a dead end. No one lives there, or so it seems. The yard is a tangle of overgrown weeds. The front porch is unstable and rotting away from decades of neglect. Cardboard has been tacked over the windows from the inside on the ground floor and the window frames are nailed tight to the sills. Should you find your way inside, save for an old cast-iron cook stove and a few items of no real value or consequence, you’d find nothing but a quiet emptiness.

Dark Hollow Road – a disturbing psychological horror driven by hate, fear, and every parent’s worst nightmare. Due for release March 2018 from Ardent Creations.