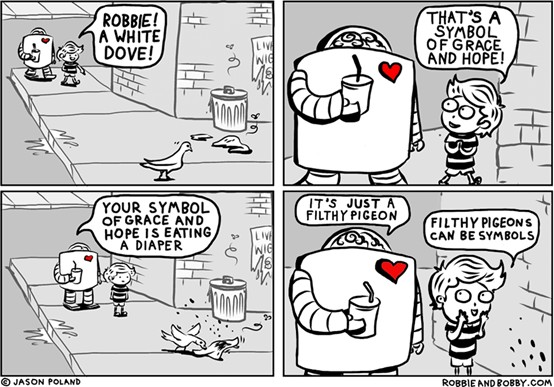 Years ago a friend of mine who spent some college time as a film student, told a story about a final short film project he done as part of a class. At the end of the viewing, discussion, critiques and questions took place. A certain blue chair was used repeatedly in various scenes. This chair became the focus of the use of symbolism and how its color clearly represented the mood of whichever character happened to use it in various ways and scenes throughout. The class was impressed by my friend’s genius! This all helped his grade on the project.

My friend then laughed, as he was telling this story, because, the chair had no symbolic meaning whatsoever in the film. It was just a blue chair that they happened to have on hand. They used it a lot because they were short on chairs. That was it. He did nothing to correct the impressions that his fellow film students discussed. Why would he? It was working to improve his grade. He would merely smile and nod as if in agreement with them.

I first observed this same phenomenon in high school English classes. The symbolic intentions of the authors were shoved down our throats by various teachers over the years. What did Hawthorne really mean when he described the enclosed garden behind the House of the Seven Gables? What items were symbolic in The Great Gatsby? Ad nauseam. Even then, I was puzzled about this kind of analysis of literature. As a blossoming writer myself, I questioned the conclusions draw by my instructors. What if the garden was just a suitable setting for the characters to interact in? What if Dr. Eckleburg’s spectacle sign was just the most genius way for an optometrist to promote his shop that the author could think if?

There’s a review for my book “Dark Hollow Road” out there written by someone who had recently completed his PhD degree in Sociology. He put a lot of thought behind the events of the book and by a lot I mean, way too many. The book isn’t a study of human sociology, seriously, it’s not. He wanted more symbolism while at the same time seemed to put down the symbolism he imagined to be there. There wasn’t any. I know – I wrote the thing. I don’t do symbolism.

That isn’t to say I haven’t tried! In the late 90’s I wrote my first novel. It’s a fantasy piece with trolls and fairies and shape shifters and the like. No symbolism. However, I did try to write a sequel to that first novel and decided I was going to give this symbolic things a shot. Very quickly the story became bogged down with my efforts to keep things straight. What’s that supposed to mean again? How can I make the color of the flowers in the pot on the window sill in the kitchen represent Lady Greyson’s lost childhood? It was ridiculous and resulted in my giving up on the project entirely.

I’m not saying the use of symbols doesn’t happen in literature. It most certainly does. What I am saying is that not all authors use it, including me. What you see is what you get. I can’t be bothered coming up with all that. It’s hard enough to write a book without them; why make it more difficult for myself?I guess I’ve always felt symbolism should be more obvious than people trying to guess what the author meant. Unless a writer specifically explains later on these hidden meanings, as far as I’m concerned, there aren’t any. And how many times have we heard the phrase, “Never assume. It makes an Ass of U and Me.”

When it comes to authors (or anyone of a creative mind) and symbolism, remember a garden can be just a garden, glasses may just be an ingenious sales gimmick, and a blue chair could have been handiest chair available at the time.