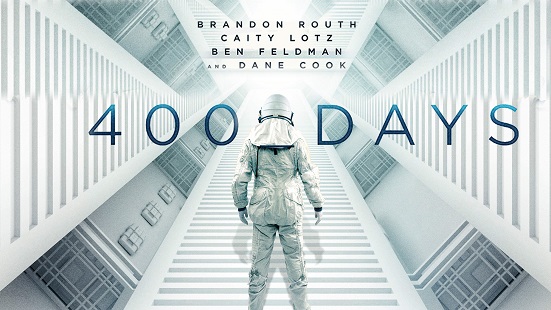 Normally I don’t go for Science Fiction, but while channel surfing the other night I chanced upon this gem and the notation that it was a psychological thriller as well as a mystery got my attention quick.

Four future astronauts are about to undergo 400 Days of testing to determine if they’ve got what it takes to endure a long voyage into space. They are locked into an underground replica of the space ship they hope to fly if they pass the tests. They’re told they will be subjected to various stressful simulations to gauge their reactions.

Everything seems to be going as planned until after what feels like an earthquake shudders their ship and they are suddenly cut off from mission control. They take it as just part of the simulation and continue with their duties as assigned. Slowly they each seem to be succumbing to the stress of their isolation from the outside world and are getting on each others nerves in such close quarters. Hallucinations start to take place. The power falters. Mission control will not, or cannot, answer. Has something gone terribly wrong or are they just being tested?

One night a half-naked and crazed man is found rummaging around in the ship’s kitchen. He is quickly subdued, but now they know something is definitely not right. Where did he come from? How did he get in? Before they can ask him any questions, the man escapes and is nowhere to be found on the ship. The final straw comes when the crew wakes up to a severe drop in the oxygen levels of their controlled environment. Life support systems have slowly been failing over the past months. They must decide.

Do they leave the ship and forfeit the simulated mission, thus surrendering a chance to be part of the real crew and flight into space or do they stay and hope the atmospheric conditions are all part of the test and all will be returned to normal soon.

They decide to suit up and head outside. Enough is enough. What they find is a world in darkness, dust, and ruin. And still, they don’t know if this too is part of the simulation or reality. What’s out there in the windy blackness that was once a grassy field and trees? Where did the intruder come from and where did he go? Are they still being watched or are they completely alone?

I enjoyed this movie a lot more than I thought I would, and I’m glad I saw that psychological thriller part of the description. I may have passed it by otherwise. There are almost no modern special effects. Instead the movie relies on a strong plot, lots of twists, very realistic human reactions to what’s going on, and a lot of mystery. The only part I didn’t like was the ending. No, no, sir. I don’t like endings like that at all!