Tales Beyond The Hollow 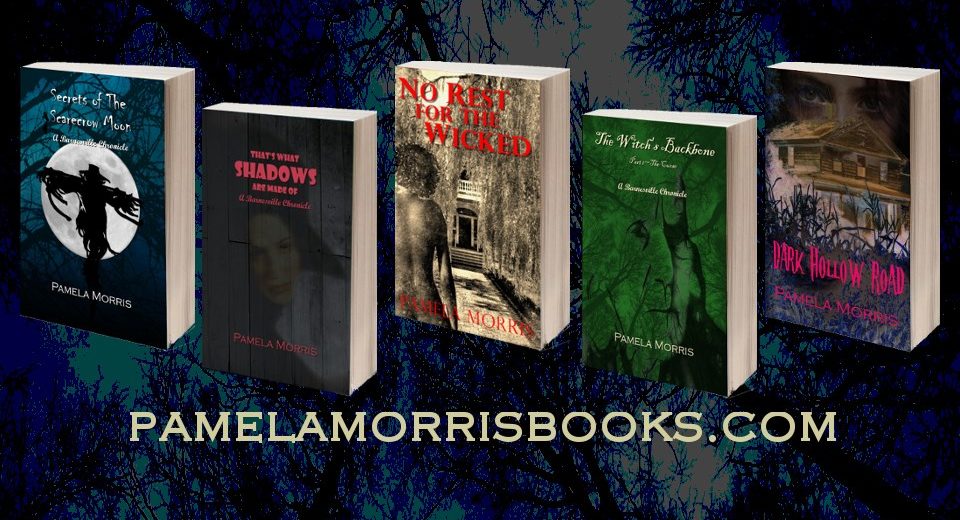 Now that Dark Hollow Road is reaching the finish line of being out and about in the world, I thought I’d step back and recap on the other titles I have out there for those who may have missed something along the way.

Secrets of the Scarecrow Moon is a Murder-Mystery full of paranormal elements.
A mysterious death sends one investigator deep into her hometown’s dark and bloody past. It’s a past the local coven of witches would rather keep buried. Can justice be served or will the witches succeed in keeping their centuries-old secrets intact?
Available on Kindle and in paperback here: Secrets of the Scarecrow Moon

That’s What Shadows Are Made Of continues the paranormal Murder-Mystery theme.
Everyone thought the local undertaker was such a nice guy, until someone murdered him.
As the police look for a flesh and blood killer, a witches’ coven discovers dark magic may be the culprit. Is the shadowy figure being seen around town stalking for its next victim real or something much more diabolical?
Available on Kindle and in paperback here: That’s What Shadows Are Made Of

No Rest For The Wicked takes a sharp turn away from the previous two releases. Oh, there’s murder, but the mystery isn’t who did it, but the dark reasons behind the violent deaths.
Every ghost has a story. Not all of them want it told.
A sadistic doctor hell bent on controlling both the living and the dead, would rather keep his final year of life a closed book. It’s a classic ghost story with a twist; it’s told, in part, by the ghosts themselves.
Available on Kindle and in paperback here: No Rest For The Wicked

The Witch’s Backbone Part 1: The Curse is a creepy coming-of-age tale.
It’s 1980 and five friends take it upon themselves to prove there’s nothing to their local urban legend and its deadly curse. That legend has other ideas.
After one of their number believes she’s seen the local urban legend, five young friends head deep into the woods to prove it’s just a story. Except in trying to do so, they may have discovered this old wives tale isn’t quite so fictional. And if the subject of the legend is real, does that mean her deadly curse is, too?
Available on Kindle and in paperback here: The Witch’s Backbone Part 1: The Curse.

Dark Hollow Road is all that the name implies, a journey into the darkest hollows of the human condition, where the real monsters of this world are made.
In the quiet Pennsylvania countryside, on a dead end road, she waits.
What does the 1948 rape of an eight-year-old girl have to do with the disappearance of a six-year-old boy seventy years later? They have one thing in common, a house on Dark Hollow Road. Empty now, the house stands as a warning to all who dare enter and take from it what isn’t theirs.
Kindle pre-orders happening now. Paperback release Mar. 23: Dark Hollow Road

Tags: Dark Hollow Road No Rest For The Wicked Scarecrow Moon Shadows Are Made Of Witch's Backbone
12Mar 2018