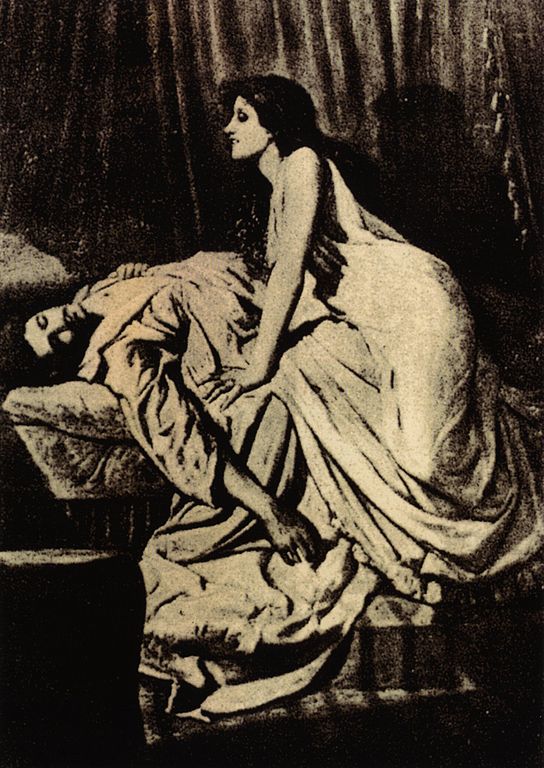 Horror, of any kind, is subjective. My goal here is not to tell you what THE best vampires movies are, but to tell you my personal favorites. I can’t even claim that the ones listed are going to be in any sort of order, but they have all left a strong enough impression on me over the years to never forget them.

My first vampire love was and always will be Christopher Lee’s Dracula via Hammer Films.  Of all the Dracula films Hammer put out starring Mr. Lee my favorite is: 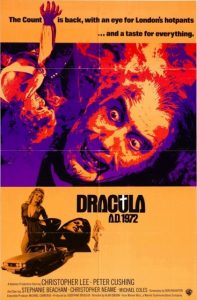 Synopsis: Dracula is resurrected ONE MORE TIME through the wonderful world of the Black Arts amongst the ruins of a church somewhere in London by one of his disciples who convinces a band of hippy chums to help him out. Turns out one of those crazy kids (a buxom, young miss, of course) is a Van Helsing. Dracula picks up on this fast and plots his revenge.

Many will quirk an eyebrow at this one, but my only excuse is that it has hippies, British hippies and I thought the guy who played Johnny Alucard (Christopher Neame) was smoking hot at the time. I was obsessed by the British and by hippies and yes, by Dracula. It’s like it was made just for me! Keep in mind, kids, I was in my tweens and early teens when I was watching all these for the first time. Lee actually does a fair amount of talking in this one, too. Lots of tall, dark, and gruesome going on here!

Synopsis: Very, very closely based on the Hamilton Deane stage play script, which first starred Raymond Huntly as the count and later, in 1931 it hit the big screen staring the more well-known Bela Lugosi.

Again, yeah, I was fourteen when this bit of wonderfulness came out. Frank just swept this love-struck vampire fan girl away. *sigh* What can I say? Apart from that I loved the whole atmosphere that was created for this film. It was dark. It was sexy. It had scary parts. It was all I could have dreamed of a Dracula movie could be and the ending is slightly different than all the other versions I knew of. It gave me some sort of hope that maybe, just maybe, this wasn’t really the end for my beloved Dracula.

Synopsis: The poor count is forced to move out of his Transylvanian castle and decides to move to New York City. He quickly starts looking for a new bride. Hilarity ensues.

Yes, this is a comedy and as far as I’m concerned the best Dracula comedy out there. George Hamilton’s sexy and serious count is completely lost in the Big Apple and his assistant isn’t really a lot of help. Better yet, the modern version of Van Helsing is Jewish. A lot of great and memorable one-liners!

Now that we have Prince Vlad Tepes out of the way, let’s move on to a young boy by the name of Martin. Okay, maybe he’s not so young after all. 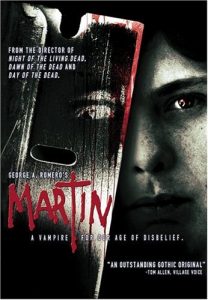 Synopsis: Martin, who appears to be “not even twenty”, but claims he’s really 84, goes to live with his relatives in a small town just outside of Pittsburgh, Pennsylvania. His cousin is disgusted by the boy and only endures housing him out of family obligation. The cousin’s granddaughter feels sorry for him and doesn’t understand why the old man is so disgruntled. Martin doesn’t have fangs so he’s forced to employ other methods of bloodletting.

Directed by George Romero, I find this movie a visual delight! Romero does for vampires what he does for all his films, they are intense.  Filmed mostly in color with black and white flashbacks, the film has a certain gritty, rough texture to it. Best of all, it was like nothing I’d ever seen before in the vampire film genre and that ending! Holy Shit! I never saw that coming at all! Everything seems to be humming along nicely then BAM! I was like, “What the what? No way!” It’s been said that this movie little-known movie is one of Romero’s personal favorites, too.

Synopsis: Based on Stephen King’s novel of the same name, Salem’s Lot becomes home to a nasty vampire who very strongly resembles the original tall, bald, pale, and rat-toothed Nosferatu and it’s up to his minion to bring him food. When a young boy and a writer both come to the realization what’s going on, they team up with the local priest to rid their town of the evil vampire and his disciple.

One of the few Stephen King novel adaptions that’s actually pretty darn good and follows the book, more rather than less. Creepy atmosphere and dang, when Danny Glick come’s-a-scratchin’ at your second story bedroom window, you know something’s not right! I was wallowing in the glory that was, and still is to some extent, Stephen King back in the late 1970s. How could I not love this one? 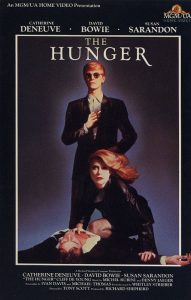 Synopsis: A pair of classy and rich vampires stalk the Goth and punk bars of the city looking not just for blood, but for sexual partners for themselves and each other. John (Bowie) begins to realize that even though Miriam (Deneuve) promised it would be forever, he’s starting to age and rather rapidly. He seeks help from a gerontologist (Sarandon) who falls under Miriam’s spell to become her newest partner.

Another vampire movie that offered me something different! As with Martin, these vampires don’t have fangs, but employ tiny daggers they wear as necklaces. This was probably the first movie I ever watched that had lesbian love scenes in it, too. That’s quite something when you’re seventeen! Plus, the musical score is amazing, from classical to punk with the unforgettable “Bela Lugosi’s Dead” performed by Bauhaus in the movie’s opening scene. AWESOME! https://www.youtube.com/watch?v=zq7xyjU-jsU

Synopsis: The empty house next door to teenager Charley Brewster become home to a vampire. The vampire, Jerry Dandrage (Sarandon), sets sights first on Charley’s mother then on his girlfriend. Charley will have none of that, but first he has to convince his best friend Evil Ed (Stephen Geoffreys) and a local horror-movie host, Peter Vincent (Roddy McDowall) that vampires are real and that he needs their help.

Anyone who knows me at all, know how much I love me that Roddy McDowall. That was the main reason I wanted to see this movie at all. Jerry Dandrage wasn’t so bad to look at either, mind you. The most memorable scene for me is when the vampire is honing in on and seducing Charley’s now sexually charged, and scantily clad, girlfriend to a song called “Come To Me”.  Can’t tell you how much I wished I was her for that scene.

Synopsis: A single mother and her two sons move to a small coastal town in California. A group of loud, young bikers terrorizes the town where mysterious murders keep taking place. The younger son meets up with two local boys who claim to be vampire hunters. They quickly convince him that the leader of the vampire pack is after his mom.

Vampires and motorcycles, you say? Count me in! When this came out I was tooling around on my own motorcycle and may have developed an attraction for ‘bad boys’ and leather. This movie has some great scenes while they are enjoying Chinese take-out and a bottle of ‘wine’ in the lair of the Lost Boys and the Frog Brother (vampire hunters) provide great comic relief. I laughed and I lusted. A good time was had by all, well, until the end where things get seriously nasty and bloody. 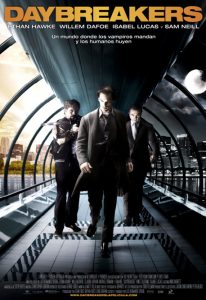 Synopsis: The year is 2019 and vampires have taken over the world. There’s one slight problem. With everyone wanting to live forever, being a vampire has become the norm and the supply of human blood is dwindling fast. And as we know, a hungry vampire is an even meaner and nastier vampire. While trying to find a solution to the whole blood supply problem, a scientist (also a vampire) happens to meet one of his own kind who seems to have come up with the answer; revert back to a human! But is he a rare oddity or does he somehow hold the cure and salvation of the whole human race in his veins.

#10 LET ME IN (2010) American remake starring Kodi Smit-McPhee and Chloë Grace Moretz Synopsis: A lonely, sad, and bullied twelve-year-old boy, befriends the girl who’s moved in next door with her father. One slight problem, she’s a vampire and it’s up to dear old dad to find her what she needs.

Ah, young love. How can you beat it? I saw this movie recently for the first time. I was greatly impressed and as with most of the other movies I’ve listed here, it offered me a slightly different take on the vampire story. The boy who played Owen was amazing. During one scene where he’s talking to his father on the phone, I was nearly in tears. You can find my full length review of this movie HERE.

And that wraps up my Favorite Top Ten Vampire Movies! Feel free to disagree. Even if you do, I hope you’ve enjoyed the list. Maybe you’ve discovered a couple movies you never heard of before and if you have, I hope you check them out!