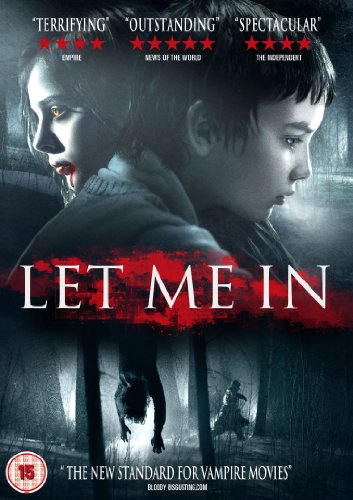 Not only must twelve-year-old Owen (Kodi Smit-McPhee) endure the nightmare of his parents going through an ugly divorce, he also faces the tortures of being the main target for the school bully. Owen keeps to himself and has no friends until a new family moves into the apartment next door. He meets barefooted Abby (Chloe Grace Moretz), who says she’s also twelve, more or less, at the apartment complex’s playground one night. She’s not particularly friendly and tells Owen they can’t be friends. When he asks why, she only shrugs and says, “Because that’s just the way it is.”  Despite this, their mutual sense of loneliness and need for a companion, draws the two children together.

Anyone who knows me, knows how much I adore vampires! I read Bram Stoker’s Dracula when I was very close to the same age as the two main characters in the book. My book shelves once housed well over 100 vampire novels and non-fiction titles dealing with the undead. Christopher Lee’s version of the Count enthralled me through my impressionable teenage years. Over the years you start to crave something unique. It’s all well and good to be about vampires, but a new spin is always welcome. Let Me In, a remake of the 2008 Swedish film, Let The Right One In, certainly puts a new spin on things yet remains true to the classic Horror idea that vampires are monsters! Abby doesn’t sparkle, that’s for sure.

Abby’s father (Richard Jenkins) knows all too well the price of loving her. She’s blood thirsty and feeding that animalist hunger can only push the boundaries of those who love her to the breaking point. When he realizes that Abby had made friends with the boy next door, he makes his disapproval very clear. However, he’s helpless to end the relationship blossoming between the two. No one is safe from Abby’s thirst: not her father, not the policeman (Elias Koteas) investigating the strange Cult-like slayings in the area, not the other neighbors in the complex, not the bullies that torment Owen, and maybe not even Owen.

The performances by Kodi and Chloe are amazing. Kodi, especially. When he’s on the phone trying to talk to his father you could feel the torment and fear in his voice. His expressions begged for help. His rage at the bullies was palatable. His young love for Abby was pure bliss and yearning. I’ve already recommended this movie to several people over the past week since seeing it. Great film!