Playing The Numbers; Or Are They Playing Me? 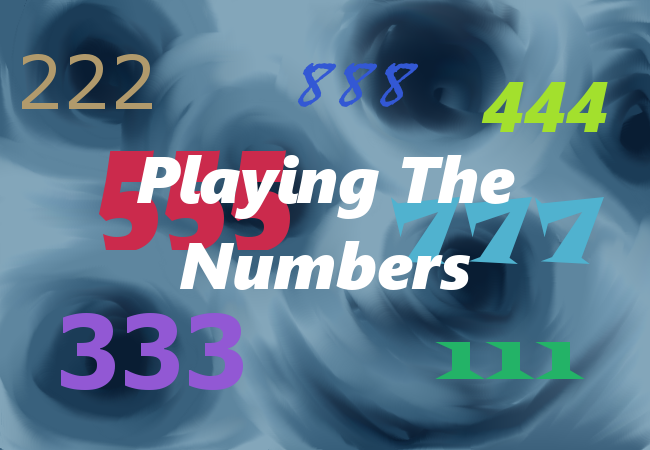 No, I haven’t taken up gambling or blowing all my hard-earned money on lottery tickets. But I have been seeing a lot of number sequences. 222, 333, 555. I keep seeing these kinds of numbers, mostly on digital clocks, and not just now and then. Over the past three or four months, since around October 2021, this has been happening on a daily basis, several times a day. Being the kind of person I am, I wondered, “What does it mean?”

I don’t believe in coincidence, so when odd things like this happen and I actually notice, I tend to look for some kind of reason for it, especially when it happens so frequently. And being as I’m interested in numerology – despite sucking at math – my first thoughts went in that direction. In all the years I’ve read about and studied these sorts of things, I’d never come across this particular topic. Was it even a thing? Of course, the Interwebz has plenty of ideas on the concept, both magically and scientifically.

Let’s start with the much more fun magical-spiritual aspects of the phenomenon. I couldn’t find any one term used for the it but the concept of ‘spiritual synchronicity’ came up a lot as did “angel numbers” and “master numbers”. I’m going to call it ‘Numeric Synchronicity’ just for ease of reference.

Once I learned it indeed IS a thing, I selected the three numbers I was seeing the most, 222, 333, and 555 before I went any deeper. I didn’t want to be influenced by what I might find when picking the number that might have the most significance to anything going on in my life. I’m still wary of all of it, mind you. These interpretations, like horoscopes, are often written in such a way as to apply to anyone, anywhere, anytime. Everyone can relate. It all has meaning to something in your life if you read in the right way. I was seeing 555 most frequently followed by 333 and 222 the least. And as any numerologist worth their salt will be quick to point out, 333 + 222 = 555. So, off I went, in quest of the meaning, or at the very least, to have a bit of fun on this little numeric adventure.

555 could not have struck home any harder. From the Law of Attraction website: “If you are seeing 555 everywhere, then there is momentum to move in a new direction. Make sure you are looking for new opportunities at this time and are ready to seize them when they come your way. Do not be afraid of change. Do not try to fight it. It is YOUR time. It is time to move forward with new experiences.” Okay, well, that’s pretty spot on, but what do OTHER ‘authorities’ on the matter say. I tried a different website for a meaning. I went to Times of India next. “You’re looking forward to the next phase or chapter of your life. It simply means that change is inevitable and that embracing it will only make things easier and more adventurous. Do not hold yourself back and welcome every new opportunity that passes your way.” And being as I was taught to cross reference at least three different sources, I found myself over at a place called AstroStyle and was told this. The headline for 5:55 reads, “Change is afoot,” followed by, “Change is in the air when you see 5:55. Like a fast moving current or a gentle breeze, there is momentum to move in a new direction.” There was more, but you get the theme here.

Alrighty then! Embrace that change that’s on the brink of occurring. I get it. I’m working on it. It’s not easy. It won’t be easy but I’m looking forward to it despite my fears and worries and doubts. But these aren’t exactly the most scientific of articles. Granted, Numerology itself isn’t considered scientific by a lot of people. So, if you’re more of the scientific mind and find all this Numeric Synchronicity just a bunch of foolish hokum, the phenomenon could also be The Reticular Activating System or RAS.

From the Science Direct website, we get this definition, “The reticular activating system (RAS) is a network of neurons located in the brain stem that project anteriorly to the hypothalamus to mediate behavior, as well as both posteriorly to the thalamus and directly to the cortex for activation of awake, desynchronized cortical EEG patterns.” Well, that’s a headscratcher, isn’t it? What? Moving on I looked for something a bit less scientifically worded. Study dot com had this to say, “The RAS has a very important role: it’s the gatekeeper of information that is let into the conscious mind. This little bit of brain matter is responsible for filtering the massive amounts of information your sensory organs are constantly throwing at it and selecting the ones that are most important for your conscious mind to pay attention to.” Hm. Interesting, interesting. That makes a bit more sense. So, is my brain’s RAS trying to draw my attention to 555 or away from it? I still wasn’t sure. I moved on to randomly selected website number three, The Movement Paradigm in hopes of more data. It wasn’t quite what I was looking for but it certainly proved interesting. The article on RAS there started out with, “Do you want to unlock the power of extreme focus and be able to use your mental energy to do whatever you want? Well, let’s start by waking up the reticular activating system of your brain.” It then gave this example that I think most of us can relate to in some way. “Have you ever decided to buy a car, or if you’ve bought a car and you’ve picked a certain color and now you see that everywhere? When I decided that I wanted a Jeep, I began to see Jeeps everywhere. My Reticular Activating System has brought to my attention, to my consciousness, that all these Jeeps were around all along, but now, I am noticing them. The Reticular Activating System (RAS) is a bundle of neurons located inside of the Reticular Formation, which is in the brain stem. This is the most primitive part of our brain. The Reticular Formation is responsible for cardiovascular function, pain perception, sleep cycle, consciousness, and habituation, which is directly linked to the Reticular Activating System.”

The article goes on to give tips on what is basically a much more belief-based practice than anything to do with scientific reasoning and one I am well familiar with; visualize and make manifest the things you want in life through meditation and be aware of and focus your consciousness on those things. If you want Car X, then focus, visualize, and manifest Car X in your brain, make it real in your RAS and it will become real in the physical world. Or as I know it as, “Thoughts become things.”

Through all this research, the question still remains, what, if anything, does it mean? Whether it’s merely neurons located in my brain stem projecting anteriorly to the hypothalamus or the pseudoscientific belief in a mystical relationship between a number and one or more coinciding events, I don’t think it really matters. What matters is that both these concepts give me some level of comfort and confidence in the future and those major life changes I have ahead of me. Each time I see a 222 or a 333 or a 555, the feeling that I’m doing the right thing and on the right path fills me with a sense of calm, that little boost of confidence I need.

I’d love to hear your thoughts and/or experiences on this phenomenon in the comments.

Speaking of changes, I haven’t put out a substantial Horror release since September 2020 when my last novel, The Inheritance: A Texas Gothic Horror, came out. This is about to change. Sales and reviews for The Inheritance have been slow, but I hope as we have now gotten settled into 2022, you’ll see fit to check it out and read about the adventures of twins Choice and Liberty Hill as they set out into the West Texas desert to try and inherit the family estate and $33 million. Of course, nothing is that easy. They’ve got several rather unpleasant obstacles to deal with, least of which involves a band of outlaw Texas bikers known as The Widow Makers.

2021 wasn’t completely devoid of Horror output from me. I was blessed to be included in an anthology put out by Crimson Pinnacle Press titled Twisted Legends: An Urban Legend Anthology. The anthology contains other notable authors such as Jason Myers, RJ Roles, Ruthann Jagge, and Thomas R. Clark.

In 2005 I wrote my first twisted fairytale, a little something called Good Spider, Bad Spider. In early January 2022, I finished my seventh and am planning on releasing the short story collection, Not Your Grandma’s Fairy Tales at some point this year. Horror has returned, but I’ve also added a bit of sci-fi, a dribble of fantasy, and a dab of futuristic dystopia to the menu. Fun stuff. You can read one of the included stories, Cinnamon & Cyanide, right here on my website for FREE!

The return of writing Horror does not by any means mean that The Many Adventures of Bill The Worm will be going to the wayside. Bill The Worm is here to stay. He’s a busy, busy worm and a new release, Bill The Worm Counts To Ten, will be happening this Spring! Bill is already trying to decide which of his many adventures he’s going to share with me next. Additionally, he has a brand-new website to pass the word on to his friends about when these stories are ready to be shared! Be sure and visit Bill The Worm’s website to stay up-to-date along with liking and following his Facebook page, Friends of Bill The Worm.

Last but not least, if you’re old like me or love that classic rock, I put up Part 2 of My Kiss Kollection video series over on YouTube yesterday. Check it out.

This wraps things up this month! I hope you all are having a good year so far and staying safe and healthy in a world that sometimes feels like Hell in a hand basket! We’ll get through this wiser and hopefully with a lot more gratitude for all that we have.