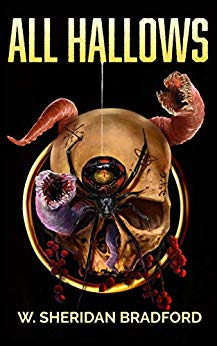 Defined as ‘literary horror’ by the author, “All Hallows” may be a bit off-putting to some readers. However, for those who like their horror richer and deeper than the usual blood and guts slasher quick reads out there, this novel may be exactly what you’re looking for.

All Hallows follows the old (nay – ancient) and somewhat cantankerous old witch, Maren Glover along as she tries to make her way home on Halloween Night. There is some pre-amble to this stroll through town, which may seem somewhat out of place, until you get further into the book then it all falls into place and makes sense. She encounters other creatures of the night, other witches, an eleven-foot-tall werewolf (But don’t call her that, that only makes her angrier and do you really to make an eleven-foot-tall werewolf even more pissed off at you? No, no you do not.), and a vampire just to name a few. All of them are sorely tempted by a high bounty placed on Maren’s head. But, Maren, old and road-weary as she is, keeps her handy-dandy bowling bag of tricks always on hand and she isn’t about to go quietly or easily into that sweet night. And, oh, does she love her sweets! Maren is a wonderful character. I couldn’t get enough of her absent-minded, somewhat disorganized old lady ramblings throughout the book. All the characters in this book are described with a flourish that keeps them each memorable and unique.

My only complaint about the book is that I think the author went a little overboard with the lengthy wording and word choices in the first half. In a couple of instances, there were sentences that covered almost an entire page.  Yes, a single sentence drawn out with enough commas and semi-colons to drive my high school English teach mad. This is typical of the old Gothic Horror novels that I so love, so it wasn’t terribly off-putting to me in that regard. This, along with wishing I had a thesaurus on hand, made the first half of the book a bit of a struggle. That being said, once I reached the halfway mark, everything changed! The narrative quickened. The sentences and paragraphs shortened. The dialogue and characters blossomed and were a delight. They drove all the action forward at a wonderful pace. It became a book I couldn’t wait to have time to sit down and get back into. Had the first half been written like the second half, I would have easily given it a higher rank without a second thought. It was all worth it in the end and I’m hoping Mr. Bradford puts out more work soon – very soon. Please!

BUY IT HERE: ALL HALLOWS by W. Sheridan Bradford