A Haunting We Will Go 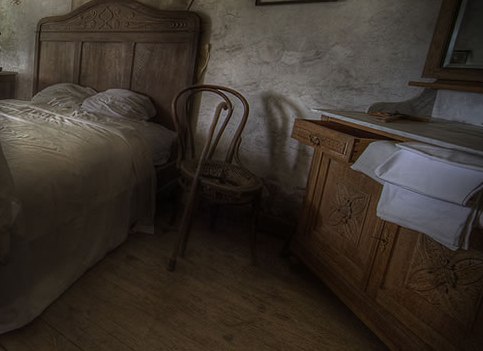 It occurred to me this morning that I’ve not written a lot about living in a haunted house for the past twenty-one years. A lot of folks think I’m nuts when I say I always wanted to live in such a place, but they all think it’s like the movies; blood dripping from the walls, people being yanked out of their beds by the ankles, books flying around, cupboard doors slamming open, or being awakened by the ghostly wails or sobs of those that have died and refuse to move on. It’s not. In fact, it’s a bit dull.

My then-husband Roger and I bought the place back in 1995. It had been empty for three years before that. Our viewing was on a cold Monday evening in January in the dark with flashlights as our only guides. The place had been foreclosed on, and was now up for bids AS IS. Bids were due that Friday. Time was of the essence. We walked through the icy gloom of the place, the old wooden floors creaking and inhaling that ‘old house smell’ we were both partial to. Outlets seemed somewhat lacking, the wallpaper in the kitchen was horrendous, nothing appeared to have been updated since the 1970s or earlier. In the backroom was a massive chest freezer where any serial killer worth his weight in carving knives and heavy duty black trash bags could have kept four adult humans on ice rather easily. I don’t remember if we dared open that freezer for our viewing that night, but there was, indeed, something inside. We’ll get back to that later.

Upstairs we found four large bedrooms, the bathroom, (again, not updated in God-only-knows how long) and a good-sized linen closet. In total, the house, built in 1886, is over 3000 square feet. Plenty of room for us and our two children and certainly a lot more room than the single-wide trailer we’d been in for the past three years or so. We talked it over on our way home and into the next couple of days, eventually deciding we were going to bid and calling the realtor to let her know how much we were willing to pay.

Needless to say, we won the bid. Once we closed, we took two weeks off work to clean and make the place habitable again. Soon we were all settled in and looking forward to all the excitement that home ownership entails.

And then, it happened. We got up one morning to find the door between the kitchen and the backroom wide open. Nothing too mind blowing there. It’s an old house, nothing is level, and maybe the door didn’t get latched. No biggie. The next night Roger made sure the door was shut firmly and off we went to bed. Come morning, the door was open again. We exchanged questionable glances. Night came, the door was closed, locked, and tugged on to make certain it was secure. And off we went to bed.

Not more than an hour later as we lay quietly in bed, from downstairs comes, “Click, Sqqueeeeak.”

“Did you hear that?”

“You going to go check the door?”

Roger and I were always into haunted and paranormal things. We visited cemeteries on a regular basis, we went into old, empty houses that we shouldn’t have been in, we used the Ouija board, and just generally found the whole subject matter fascinatingly. So, next morning when we went downstairs and found the door once more wide open, we knew exactly what to do. Roger stood in the doorway and said, “Okay, you’ve made your point. We know you’re here and we don’t care. You are welcome to stay, just stop opening this door, please.” That door had never opened on its own again to this day.

But, the door wasn’t our only experience. Once we were walking from the kitchen through the dining room towards the living room. At that time, the den was more a playroom for the kids than an office area. From the door of the den, a piece of fake fruit came rolling out right in front of us. I think it was an apple, maybe an orange. Either way, we figured it was one of the kids playing in there and being silly. Nope. Both kids were in the living room watching television at the time. The front porch light switch used to go on and off by itself quite a bit. It’s one of those heavy duty ones you really have to CLICK into place. You’d hear the ‘click’ and on or off would pop the light outside. The television would go on and off on its own from time to time. Most frequently was the sound of footsteps passing through the dining room and going up the stairs to one of the bedrooms. Many, many time I would be busy in the den or the kitchen and hear the distinct sound of the front door opening and someone coming in and heading upstairs. After so many years, you learn the sounds of your house, what’s normal, what’s not.

We had the house repainted and the porches repaired. The lawn that had been a hay field returned. One Saturday morning there was a knock at the door. The house was a mess, of course, and we were all lounging around in our weekend best. The woman said she had heard that someone had bought the place and was fixing it back up and said she was the daughter of the people who had owned it back in the 1970s and that she’d grown up in the house. She said she’d not been back since then and was sorry to intrude, but could she come in and see the place again. We let her in.

She was pretty emotional as she walked through, pointing out this and that while sharing her childhood memories of the place. And then she went upstairs and said in a trembling voice, “Oh, this is the bedroom Daddy died in.” She told us a little bit about her father and that his name was Herman(n).  She didn’t stay long but she certainly left a lasting impression. We didn’t tell her about our experiences, but for some reason we immediately felt that’s who our occasional, unseen visitor was. From then on, we always have called him Herman(n).

Despite it all, I’ve never felt afraid of whatever, or whoever, was doing all this. It was our ghost and we were happy to have him or her. My kids might say otherwise, but it’s never bothered me at all.

As for what was in the freezer. I’m still not sure what it was other than some sort of maybe aquatic creature, maybe a fish though the bone structure was less fish-like and more snake-like. An eel? A snake? I don’t know. It was nasty and by some miracle I managed to get the whole mess out of there without 1) falling head first into the freezer and having the door lock and seal on top of me or 2) throwing up.