The Horrors That Grew Me – Ghostly Encounters 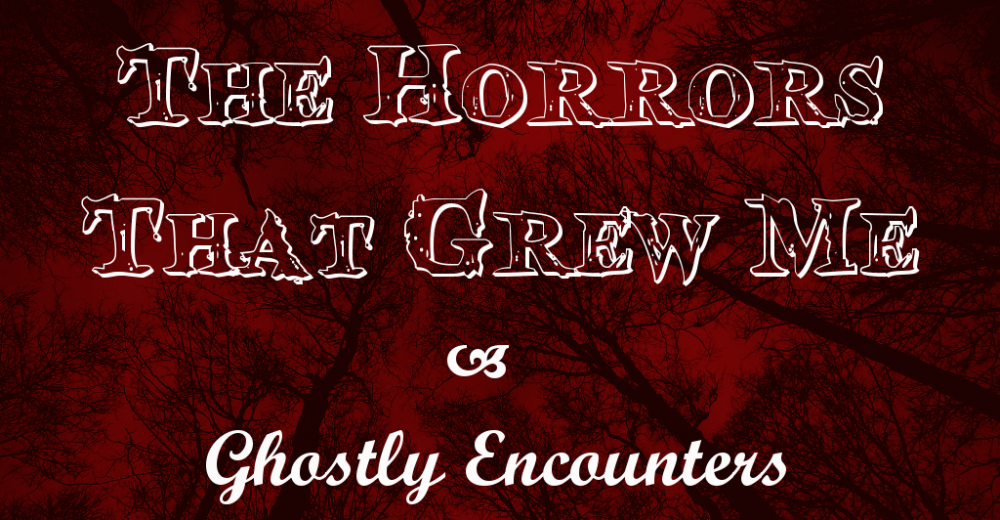 I’m not sure how old I was when my grandmother told me the story about the time she saw a ghost at a friend’s house. I couldn’t have been a teenager yet. This was the same grandmother who bought and taught me how to work an Ouija board, instead of the getting me the vampire books I’d picked out, for my 13th birthday. Pretty awesome, grandma, huh?

Now, before someone gets all up in arms about the DANGER!DANGER!DANGER! of using an Ouija board, I was then and am now, fully aware of what some people say and truly believe. 99% of my experiences have been positive. Maybe it’s because I always approached it in a positive, respectful, and empowering way. I didn’t go in full of fear or anger or anything that might draw in the negative. I honestly don’t know. As for all the talk I’ve heard about demons and all that. Meh. Angry human spirits, absolutely. Demons? No. Maybe that’s something that was instilled in me by my grandmother during those early lessons.

Needless to say, this whole believing in ghosts thing has always existed in my life. I’ve never known what’s it’s like to not believe. Maybe that’s why I’ve had what might be considered an above-average amount of experiences with it. I can totally understand why others don’t feel this way and I’m fine with that. I’m not here to try and change anyone’s mind. I’m here to tell you some stories.

My first experience, that I can remember, happened at a friend’s house. You can read all about it over at Thomas Gunther’s website where I answered his question, “What Scared The Hell Out Of You?”.

Another incident happened while my first husband and I were exploring an abandoned brick house back in the late 1980s. We weren’t looking for ghosts at all, just wanted to check out this old place. While we were doing so, I heard what sounded like an old woman humming. The image of a woman sitting out on the front porch sitting in a rocking chair popped into my head. Just sitting there, humming to herself and rocking. It was a very peaceful, happy feeling.

While with a group of friends, again, exploring an empty house that was anything but empty, I walked into the dining room and it felt like my whole chest constricted and the air got very heavy and tight. As soon as I’d leave that room, the feeling would stop. Never saw or heard anything, but that sensation was enough for me to know something, or someone, was not happy about having their house invaded by strangers. I avoided that room as best I could during the rest of our visit.

In 1994, while looking for a house to buy, we found another old place. It had a For Sale sign out front so we stopped to see what we could see through the windows before calling the realtor. While standing at one corner of the property, I heard footsteps coming around from the other side. I assumed it was my husband so paid it no mind until I turned and looked. It wasn’t him. It was a woman dressed in an early 20th-century dress, white or some other light color, with her dark hair pulled up in a Gibson Girl-style. We made brief eye contact, she smiled just a little bit then was gone. It was that fast.

Although we ended up not getting that house, we did find one the following year that met all our criteria, including a resident ghost. Our first encounter with the man we’d later call Herman, happened only a month or so after moving in. It was late February or early March and we woke one morning to find the door between the kitchen and back room wide open. We thought nothing about it at the time. One or the other of us probably hadn’t closed it all the way. It was (and still is) a tricky door to get shut. The door was closed and checked that night and off we went to bed. The next morning, it was open again. Now we’re starting to wonder. That night the door was closed, locked, and tugged on to make extra sure it was completely latched and tight. Good to go, we headed upstairs to bed.

It wasn’t an hour later when we heard a click and a the familiar squeak of that kitchen door opening. In the darkness of the bedroom I said, “Did you hear that?” “Yeah.” “You going to go check?” “Nope.” Sure enough, the next morning the door was open yet again. It was creepy, but not overly scary for some reason. My husband went to the door and said, “Okay. We get it. We know you’re here and we’re okay with that. You are welcome to stay, but can you please stop opening this door?” Guess what? That door has NEVER opened on its own since and that was in 1995.

Other things have happened over the years. Electronics going on and off as they wish, the sound of the front door opening followed by footsteps through the dining room before continuing up the stairs, and various children’s toys rolling out of room where no child was present. During our first year at the house, a woman came to the door one Saturday afternoon.  Of course, the place was a mess. She said she’d heard someone had bought the place that had been empty for three years before we came along, and it was getting fixed up again. She told us she lived there in the 1970s and hadn’t been back since moving out in her late teens. As she reached the top of the stairs, she stopped and looked into the room we were using as a spare and said, “Oh… this is the room Daddy died in.” You guessed it, Daddy’s name was Herman.

So, there you have it, some of the ghostly encounters I’ve had that have certainly inspired me as a Horror writer and an overall lover of things that go bump in the night.