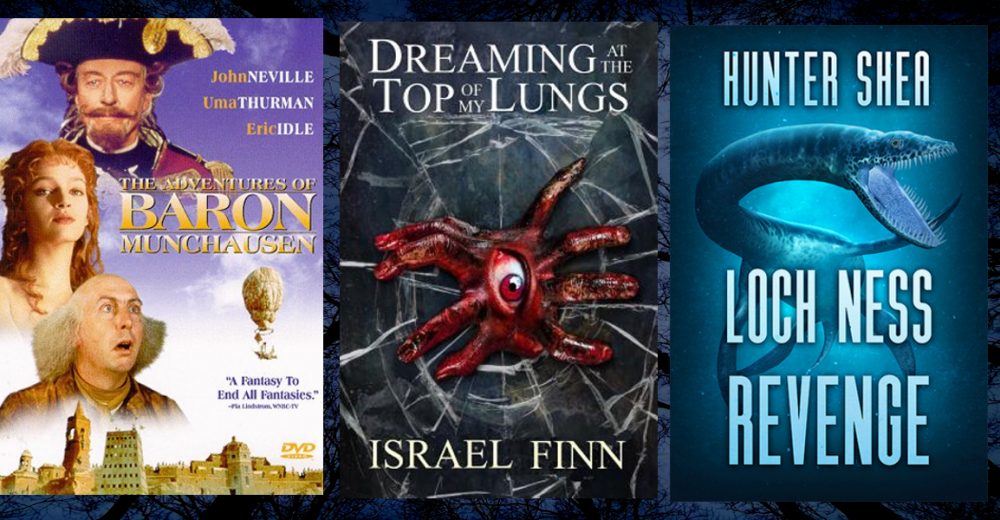 According to my Blog Calendar, this is the weekend I should be posting some sort of review, be it a book or a movie. This time around, being as I’ve been so intent on finishing up the first draft of my next Barnesville Chronicle novel this past month, reading anything too long and deep just hasn’t happened.

I haven’t watched any movies worth reviewing. Unless stating that The Adventures of Baron Munchausen isn’t my cup of tea, counts as a review. Technically it’s not a Monty Python movie, but Terry Gilliam and Eric Idle were both involved in its creation, as was Robin Williams! You’d think with that sort of line-up, it’d be something more amazing than I found it to be. It just left me confused and wondering what sort of drug Gilliam was on when he came up with all this. About halfway through, I decided I had more interesting things to do, like sort through my dresser for old clothes worthy of being donated somewhere.

Moving along, I did do a bit of reading.

Dreaming At The Top Of My Lungs by Israel Finn is a collection of short stories of the horror variety. There’s always a touch of envy in me for people who can pull off a successful short story. In a mere 112 pages, Israel managed to keep me fully engaged and amused for about ten days. As with any collection or anthology, by even the most famous of writers, there are going to be stories that readers will enjoy more than others. I have to be honest and say that there were a few in this collection I didn’t quite ‘get’ or felt like they were lacking somehow. However, the majority of them I thoroughly enjoyed and enough so that I’d easily consider picking up more work from this up-and-coming author. My biggest complaint about this book is that it was far, far too short.

Loch Ness Revenge by Hunter Shea was another quick read for me, coming in at 141 pages. Hunter is a pro at sucking the reader in and half-chewing them before spitting them back out covered in blood, goo, and whatever other sorts of partially digested stomach contents may have been in there at the time. And I mean that in nicest way possible. If you enjoy monster killing mayhem and madness, you really should check out not just Loch Ness Revenge, but all his other cryptid tales. I have the same complaint with this as I did Israel’s book – too short. I wanted more details about the characters and their lives, but with these shorter books, Hunter’s skills and talents as a story teller aren’t being put to their full potential. I really do prefer his novel length works. For me, a story is only as good as how well I get to know the players.

Short and sweet this time around, folks. I have some thicker works reaching the top of my TBR pile now and with first draft of my latest Barnesville Chronicle, The Witch’s Backbone finally done, maybe I’ll find some breathing room to do more reading.