The Day I Wore Fangs 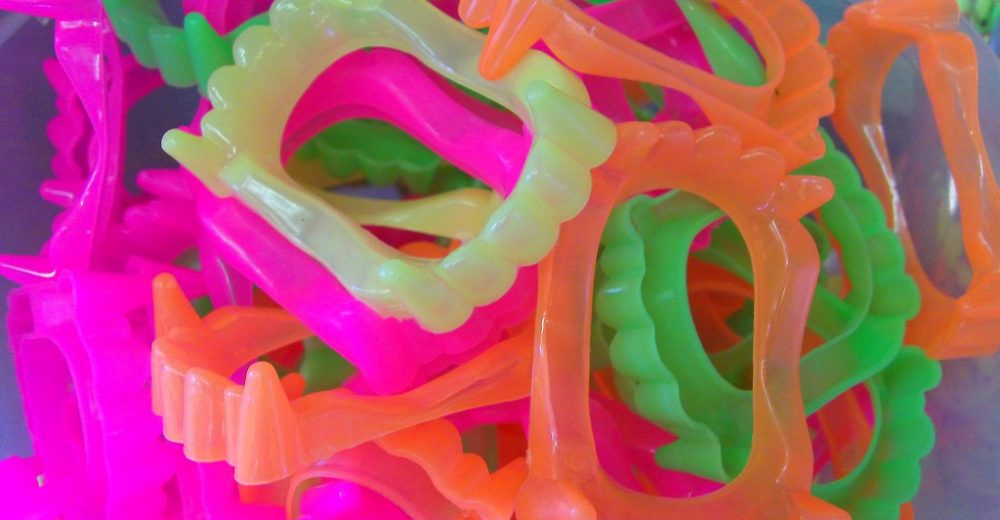 I seem normal enough on the surface. I don’t have crazy or colorful hair. I don’t dress in any shocking manner. The only piercings I have are in my ears and the few tattoos I have aren’t seen all that often. Yup, just a normal, everyday kind of gal …until you start asking around, that is.

If you were to approach some of my childhood friends, mainly from my high school days, you’d get the inkling that maybe this normal thing is all an act. Or maybe I’ve just outgrown the black fingernails, eyeliner, and lipstick. Maybe dressing all in black every day, muttering in Latin, and sitting in the corner of the school cafeteria at lunchtime alone with my nose buried in some sort of occult-themed novel or research book was all just a fad; something I’ve grown out of as my mother so fervently prayed I would.

Or maybe in my dotage, I’ve just toned those things down a bit, just a bit. I still have my moments, like the day I wore fangs.

It was about ten years ago, making me about forty years old at the time.

Ever since I first began watching all those vampire movies, I’ve wanted a pair of realistic-looking fangs. I wondered how Hollywood did it. I considered talking to my dentist about it, but never did. Even if had dental insurance, I’m pretty sure they’d not cover something like that. I attempted to craft my own numerous times, adapting those cheap plastic things, buying different sorts every October hoping against hope that at last I’d found The Ones! I even tried to make some out of wax, but nothing had that real look I was striving for.

And then, the internet and online shopping happened. I found a site that looked promising, vampfang.com , but I didn’t get my hopes up too high. I’d been disappointed before. $30 seemed an awful lot for fake fangs, but my primal urges screamed out for satisfaction. I ordered them. They arrived in a little coffin-shaped case. I remained skeptical.

One day while I was home alone, I decided it was time to put that $30 to the test. The results? Amazing! I couldn’t have been happier! Not only did these fangs look real, they allowed me to drink (no, not blood – I’m not QUITE that off) as long as I was mindful and to eat, though somewhat awkwardly.

The following July, I bought them in October, I decided to step up my game. I was no longer satisfied to just wear them around the house and yard. It was time to go public and what better way than to just pop them in on a Friday morning after brushing my teeth while getting ready for work?

I don’t work with the public much, but I do have a few office mates. My goal was to just act natural and go about my day, not to flash the fangs at everyone I met or spoke to. Let’s see who notices! There’ not a lot of chit-chat in my office, but my boss did eventually take note. She rolled her eyes and laughed. “Only you, Pam,” she said. “Only you.” By the end of the day, half a dozen people were aware I was in vampire mode.

It being the Friday after payday, it was also grocery day! Directly after work I headed over to one of the bigger grocery stores in town. No one noticed as I picked out my fresh fruits and vegetables, coffee, milk, butter, and eggs. I was paid no mind at the check-out as I unloaded the cart and helped bag things up. And then the cashier, a young man in his early-mid-20s, told me my total and glanced up. I gave him a slight smile as I opened my check book. There was a flicker of surprise in his eyes. His mouth dropped open for a fraction of a second, then he looked away and refused to make further eye contact.

A few minutes later, I pushed my packed cart out of the store and towards my car, wondering about the conversation that likely arose from the lad’s encounter with the normal-looking lady with fangs who had just exited the building.

I did this several more times, but the first time was the sweetest and most memorable. Now I just need to get some of those weird-colored contact lenses …maybe something along the lines of lizard eyes.