Book Review – We Are Always Watching by Hunter Shea 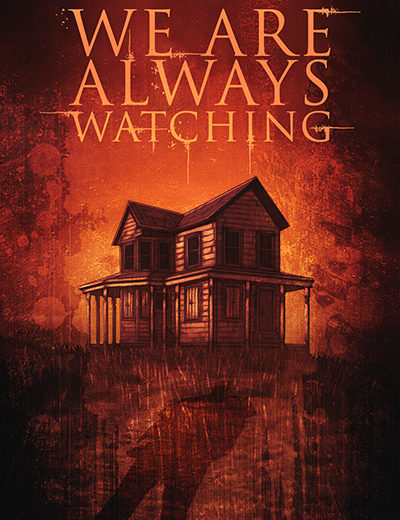 Book Review – We Are Always Watching by Hunter Shea

After being hit by very hard times, fourteen-year-old West Ridley and his parents are forced to move in with his ornery grandfather, Abraham. As if living with the grumpy and less-than-hygienic old man isn’t bad enough, the old family farmhouse is falling to rot and ruin and Grandpa couldn’t care less. In fact, he seems to intentionally want to drive them out with insults and rage. But, the family has no other place to go and no money to get there if they did. Buttermilk Creek, Pennsylvania is the bottom of the barrel, isolated, creepy, and filled with more terror than even the Horror-loving West can take.

We Are Always Watching is loosely based on real events that Shea has taken and run with, twisting them into his own horrible version of a nightmare, as he does with all his work. He draws you into the confused world of West’s new reality. Family secrets start to leech to the surface while the long, hot, boredom-drenched days draw West to explore places he probably shouldn’t go. The more West finds out, the more he comes to realize he and his family need to get the hell out of Grampa Abraham’s house! Like, NOW!

I enjoyed being drawn in with West. Hunter did a great job of showing us the world as seen by a fourteen-year-old boy. That, in and of itself, was pretty frightening (and funny) at time. The secrets that dripped out were just enough to quench your thirst, just in time for another bout of terror to dry the back of your throat before another promised-drop of refreshment came into sight.

It kept me guessing and entertained throughout but it lacks that certain level of explosive and long-playing mayhem I’ve come to associate with Hunter’s cryptid-based novels. This was much more subtle. A much slower pace that pulled you in one little step at a time. I like that in a novel. It’s very much a slow-burn.

One  element I didn’t like has nothing whatsoever to do with the author’s skills or genuine talent, it’s the actual formatting of the book. I’ve never read a Sinister Grin publication before so I’ve no idea if it’s their normal practice to have the text double-spaced as it is here. It almost felt like a bit of a rip-off getting this nice, hefty book only to open it and realize it should have been about half the thickness had they single-spaced it like is normally done. I felt like I was reading a manuscript, not a finished novel.

All that in mind, I’m going to give We Are Always Watching …