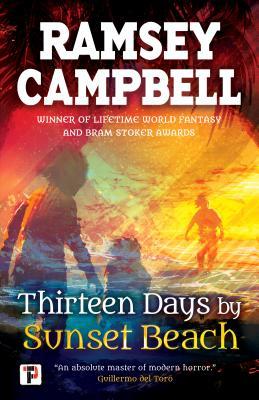 Though not entirely oblivious of Ramsey Campbell’s name and work, I am hard-pressed to recall what stories or novels of his I’ve read in the past and I know I have. Likely way back in the 80’s when I easily devoured a novel a week and paid little attention to the author’s name. When I saw this book on the list of titles I’d be getting with the other Flame Tree Press ARCs I requested, I was pretty excited to refresh my memory on Campbell’s work.

As a fan of the genre and the monstrous beings that inhabit it, I quickly picked up on what Ray, his wife Sandra, and the rest of their family were about to encounter on the Greek island of Vasilema during a two-week-long family vacation. Over the course of the holiday, Sandra – who is dying – finds herself feeling rejuvenated while her teenage grandchildren act like dark and brooding teens forced to endure quality family time in a family that seems hell-bent on squabbling among themselves.

I struggled a quite bit with the dialogue, the main reason I gave it 3 instead of 4 stars. At times it didn’t seem to flow as naturally as it could have and I kept wondering if maybe I was having a hard time because of a difference between British layout vs. American. One too many times I found myself puzzled over who was speaking or thinking what was being said by a particular character didn’t come across as being age-appropriate.

Other than that, Campbell handles the subject matter well and in such a way that other readers, maybe not so familiar with it, will find themselves deeper into the novel before they realize where the danger lurks. Despite knowing, I was still pulled in wondering when these people would come to their collective senses and take some precautionary measures to protect themselves and not leave poor Ray floundering all alone with his suspicions. How is Ray ever going to be able to convince them that there’s more going on that just make-believe stories and local legends? Is he going to be able to protect his wife, children, and grandchildren from any of it? Will they be able to get off the island before it’s too late?

I found Thirteen Days By Sunset Beach a very unique take on the genre – something that is increasingly hard to come by. For that reason alone would recommend it to others who are looking for something outside the normal hum-drum way of presenting it.