The EW! Factor & Writing That Scares You. 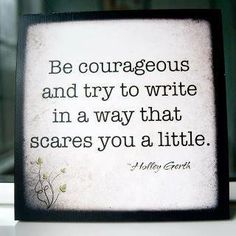 What I’ve been writing lately does indeed scare me a little bit. One might think I have a lot of unsettled and disturbing issues I should probably talk to a professional about. I assure you, that is not the case. It’s what the Muse has been bringing me and nothing more, says the woman who sees and hears fictional people and places in her head on a daily basis.

We’ve been designing publicity cards and the like over the past couple weeks. Finally got the last batch sent off to be printed this morning. I’m pretty sure I’m spending more on promotion than I’m actually making in book sales right now. In the long run, I’m hoping it will be a small price to pay and that in time it will all have been worth it. It takes money to make money, so the saying goes.

I’m very excited about all the events I’ll be promoting my books at this year. Next week I’m doing a talk for a local book club dinner. In July I’ll be appearing with other local authors at the Blueberry and Books Festival in Berkshire, NY. I’m hoping to make a guest appearance on a weekly podcast put out by a group of paranormal investigators in the area in September. In October I’m the guest author for Owego, NY’s First Friday Artwalk at Riverow Bookshop. This event will also premier my newest title NO REST FOR THE WICKED. All that AND organizing a wedding that’s taking place in August!

NO REST FOR THE WICKED is a classic ghost story partially told by the ghosts! If you’ve read my previous book THAT’S WHAT SHADOWS ARE MADE OF, you’ve already met one character who appears in the new book, albeit a much younger version. When a group of ghost hunters and the new owners of the house try to find out what’s going on and why the house is haunted, they run into some rather nasty difficulties. Like the tagline says, “Every ghost has a story. Not all of them want it told.”  In some cases, you may not really want to know what went on either, but that’s all part of the gruesome charm of the thing, The EW! Factor, as I call it.

My current work-in-progress, DARK HOLLOW ROAD is probably the most unusual thing I’ve written and also contains a healthy dose of The EW! Factor. In a nutshell, the story has two parts. Part one, represented by the odd numbered chapters, is told in first person and introduces us to Mary Alice Brown. She begins her story when she is eight years old in 1948. The family lives a poor and isolated life in rural Pennsylvania. Her mother dies after giving birth to a stillborn child that would have been Mary’s fourth sibling. After these death’s Mary’s father falls into a bottomless, mean, and violent depression which he freely takes out on his children. As the oldest, Mary is forced to take on all her deceased mother’s duties. All of them.

Part two, the even numbered chapters, deals with the present. Told in third person, we meet Renee Evenson, her partner Samantha Whalen, and Renee’s six-year-old son Brandon, six months after they’ve moved into a small house within sight of the now abandoned Brown house on Dark Hollow Road. A strange, skinny, funny-smelling lady appears one morning asking to borrow some sugar to fill the canning jar she’s brought with her. Brandon takes the jar and goes to talk to his mother, but when they return the woman is gone, along with Brandon’s coloring book. Brandon quickly dubs this woman The Sugar Lady.

With each chapter the lives of these two very different families begins to twist together until the dark, madness of Mary Brown’s current existence takes control over the once innocent life of Brandon Evenson.

And that is all I’m willing to reveal about that little gem.

So, yeah. I’m busy and often wishing I had more time to just write instead of having to squeeze it in here and there between everything else. It will get done eventually. Besides, I really don’t like to rush my Muse. She’s been very kind to me these past few years. I don’t want to nudge and prod at her too much for fear she’ll decide a vacation is suddenly in order and leave me.  (Read “writer’s block”).

Hope you’ve enjoyed this little update and that you’ll visit again. Also, don’t forget to come see  and LIKE me on Facebook.