Write What You Love: The Joys of Genre Hopping 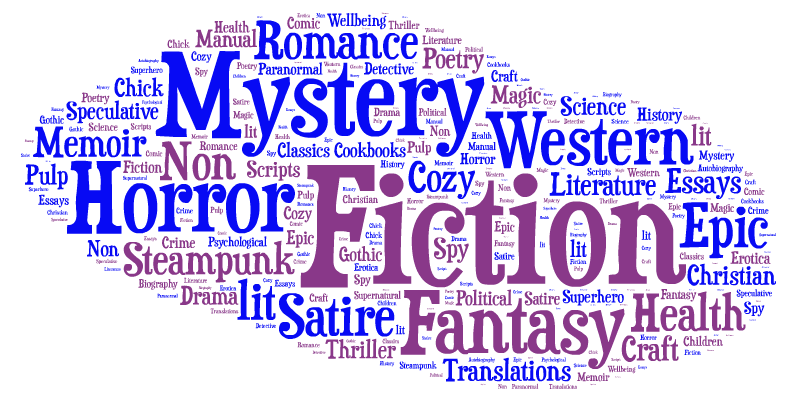 Back in November of 2015, I blogged about The Horror of Women . It dealt with the difficulties women have getting published in the Horror Genre. Though I still struggle with the reality of that whole situation, I’d much rather write horror than what I was initially published in, erotica.

For centuries women have been viewed by the publishing world as inferior writers. For that reason they have used more masculine or gender neutral nom-de-plumes . What many people may not know is that some of their favorite female authors have also written in multiple genres.

Judy Bloom, known best for her “Fudge” series took a walk on the trampy side with her novel, “Wifey”. Anne Rice took a side trip from her witches and vampires to explore kink with the “Sleeping Beauty” trilogy.  Joyce Carol Oats wrote gothic horror, murder and crime fiction, romances, historic fiction, fantasy, realism and surrealistic novels. All these woman are successful writers who dared step outside of their comfort zones and explore beyond the old adage of “write what you know”. I’m more inclined to write what I enjoy writing and I’ve had several different loves.

As a young adult I dreamed of writing Children’s fiction and even took college level classes in Children’s Literature and Illustration to pursue that goal. Somewhere along the lines for reasons that are unclear to me, my first novel turned out to be in the Fantasy genre. Beyond what was require of me in high school and the reading of The Hobbit, fantasy’s not my thing. On an awkward dare from a friend, I began writing erotica. I never saw that one coming (pun intended). Five published novels later, I’d had enough.

Having always loved murder-mysteries, horror, and anything to do with the paranormal, that was my next genre pick. This, I feel, is where I truly belong. Witches, ghosts, and bogeymen, oh my! In 2013 I saw my first paranormal murder-mystery published and was on cloud nine until, about six months later, my publisher announced they were going out of business. Now what? I already had another novel done and in the editing process for these people. Heartbroken, but knowing this was where I wanted my writing to go, I carried on and finished the second book and began the whole query, query, query, submit, submit, submit, rejected, rejected, rejected process all over again.

Had I messed up? Should I go back into the closet and return to the erotica where I was still seeing decent sales and a monthly royalty deposit in my account? Don’t get me wrong, the erotica was fun to write and I learned a great deal about some aspects of the publishing business, but my heart and writer’s soul wasn’t into it. No. I just couldn’t do it. I’ve never felt so creative and productive and pleased with my writing since making the genre hop. With fans of the first murder-mystery contacting me at least once a month over when I’d have another book out, I realized it was time to change tactics … again. The traditional publishing Gods were not with me. I was letting everyone down. I had to do something drastic and decided to self-publish.

Because of that, I had the pleasure of being invited to five author events in 2016. I’m hoping to do at least that many for 2017. It’s rather difficult to peddle your erotic-wares in public knowing your mother’s pastor is likely to walk by and say hello or you’re going to see old friends and teachers and try to explain how you know about “those sorts of things”.  It’s called research, people. As I’ve said before, I like vampire and murder-mysteries, too, but that doesn’t mean I believe I’m a vampire or that I’m going to go out and murder someone. Sex may sell, but not in a small town family-friendly community center or a privately owned bookstore. It’s a lot easier when it’s a murder-mystery or something about haunted houses or Shadow People or urban legends.

With three paranormal novels now out and another on the way later in 2017, I may not be raking in the dough as much as I one day hope to, but I’m having a lot more fun and I’m getting much needed exposure. I’m mingling, setting up displays, doing book talks and signing and, though I write under my maiden name, I’m not really hiding behind a pen-name anymore. I’m being myself and sharing my love of the macabre.

I’d still love to put out a Children’s book, too. Maybe I will one of these days.

If you’re considering writing something different than what you’d normally do, do it! Don’t limit your imagination to a single genre. You have a slew of successful female (and male) writers who have already dared to be different. Georgette Heyer, who is better known for her romance novels, has also dabbled in detective fiction. Children’s book author Sonya Hartnett wrote a rather sexually graphic novel that created a bit of a stir. You’re in good company no matter where you decide to let your writing take you, just don’t be afraid to explore.

Taking that step could very well lead you exactly where you want to go. Start walking!